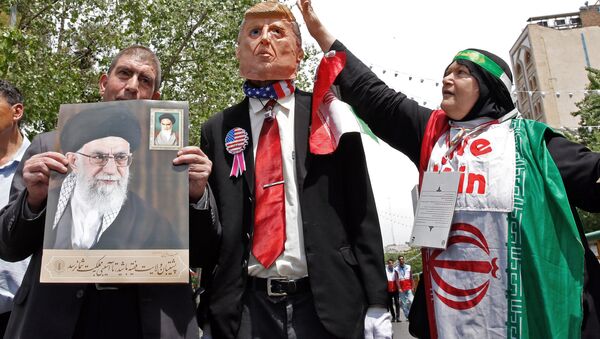 The statement comes amid ongoing tensions between Washington and Tehran, which escalated on 8 May, when the Islamic Republic suspended its participation in the 2015 Iran nuclear deal. The move was followed by the US sending an aircraft strike group, Patriot interceptors and B-52 bombers to the Middle East to tackle the alleged Iranian threat.

US President Donald Trump has underscored that even though he is ready to sit down with Iranian counterpart Hassan Rouhani, he hasn't ruled out military action against Tehran.

“So Iran is a place that was extremely hostile when I first came into office. They were a terrorist nation number one in the world at that time and probably maybe are today,”  Trump told the British news network ITV.

On the possibility of a military option related to the Islamic Republic, Trump said that “there's always a chance”.

“Do I want to? No. I'd rather not. But there's always a chance”, he pointed out, adding at the same time that he “would much rather talk” to Iranian President Hassan Rouhani.

The remarks come a few days after the Iranian Foreign Ministry's spokesperson Abbas Mousavi was quoted by Mehr News as saying that Tehran is expecting a change in the US’ behaviour rather than just its rhetoric.

He emphasised that the change of the US' conduct was “the criterion required for any talks to take place”.

Mousavi also underscored that the US policy of exerting maximum pressure against Iran, recently reiterated by Secretary of State Mike Pompeo, shows a continuation of their same erroneous approach "that needs reform".

The rebuke followed Pompeo stating that the US is willing to engage in dialogue with Iran without preconditions and that Washington is ready to have a conversation with the Islamic Republic when it “behaves like a normal nation”.

Iranian President Rouhani, for his part, reacted to Washington's proposal to negotiate without pre-conditions by saying that US authorities actually had left the negotiating table, and the talks “should return to [their] normal state”.

Rouhani also signalled Tehran’s readiness to pursue a dialogue with the US, provided that the White House shows respect and follows international rules. Tehran has repeatedly warned Washington against trying to attack the country, pledging retaliation in response to any aggression. At the same time, Iranian Supreme Leader Ayatollah Ali Khamenei pointed out that Iran seeks no war with the US.

Trump's Iran Strategy Prompts Split in US Congress and White House
The developments come amid mounting US-Iran tensions which exacerbated last month, when the US imposed more anti-Iranian sanctions and sent an aircraft carrier strike group, a squadron of B-52 bombers and a battery of Patriot missiles to the Middle East.

Iran, for its part, suspended some of its obligations under the 2015 Iran nuclear deal, also known as the Joint Comprehensive Plan of Action (JCPOA) on 8 May 2019.

The move came exactly a year after President Trump announced the US withdrawal from the JCPOA, also imposing strict economic sanctions against Iran.