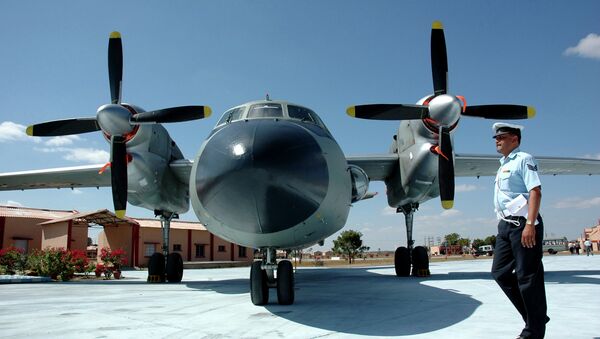 In June 2009, an An-32 jet crashed in the same region near the Chinese border after taking off from the Mechuka airfield with 13 people on board. After that, India and Ukraine signed a deal for upgrading 101 An-32 aircraft.

New Delhi (Sputnik): The search and rescue operation to locate the missing Indian Air Force An-32 military transport aircraft, with 13 people on board near China border, was intensified during its third day on Wednesday.

The military aircraft went missing on 3 June after the plane was airborne from Jorhat Airfield, bound for the Mechuka Advanced Landing Ground, around 40 km from the China border. The Indian Air Force (IAF) has deployed two more Su-30, two C-130J, and two Advanced Light Helicopters in the region to locate the jet. The aircraft are equipped with advanced sensors.

"IAF has intensified efforts to locate the missing AN-32. Despite challenges posed by vegetation, inhospitable terrain and poor weather, the search has been expanded. All leads from airborne sensors are being closely assessed and followed-up with search by aircraft & ground teams", the IAF said.

READ MORE: Pakistani Actress Malik Weighs in on Missing An-32 Mystery With Jibe at PM Modi

India to Procure Simulator for Upgraded An-32 Aircraft
On Tuesday, an Indian Navy P-8I spy plane joined the search operation. The Indian Space Research Organisation (ISRO) has also engaged its two remote sensing satellites for taking images of the area.

An-32 transport aircraft play a critical role in the Himalayan region, as they can operate with minimal ground infrastructure to transport troops, food, and equipment to far-flung areas.

In 2007, India had planned to replace the An-32 aircraft with a jointly developed 20-tonne Indo-Russian medium transport aircraft, but it did not materialise as differences emerged between the two countries due to the unavailability of defined specification of engines at the preliminary stage.

Meanwhile, India and Ukraine decided to sign a $398 million deal in 2009 to upgrade its 101 An-32 aircraft, of which only 55 aircraft have been upgraded so far, while modernisation of the remaining jets has been awaiting equipment from Ukraine for the last three years.