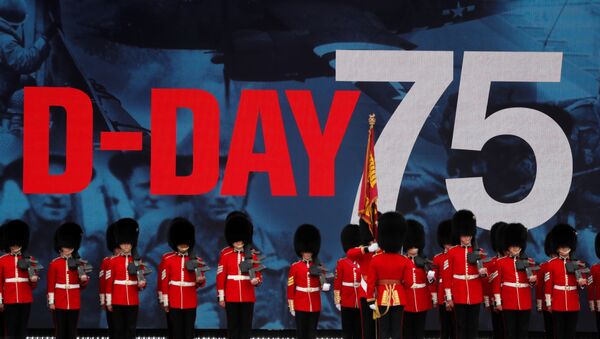 Nikolai Gorshkov
All materials
Queen Elizabeth II has been joined in Portsmouth by 15 world leaders to commemorate D-Day, the Allied invasion of France in June 1944. They marked the 75th anniversary of the event that established a Second Front in the war against Nazi Germany.

But the leader of the country that bore the brunt of the fighting on the first front – the Eastern — was not invited.

Neither Britain nor France invited Russian President Vladimir Putin to attend the commemorations that began in Portsmouth and will continue in Normandy. With the ever dwindling numbers of veterans, the 75th anniversary of D-Day will probably be the last big official celebration of this momentous event in the history of mankind. But will it do justice to the great wartime cooperation of Britain, the United States, and Russia?

We don't know what discussions the Western governments of today have been having behind closed doors regarding the guest lists, but British government papers declassified five months ago shed some light on their thinking back in 1994, during the preparations for the 50th anniversary of D-Day. 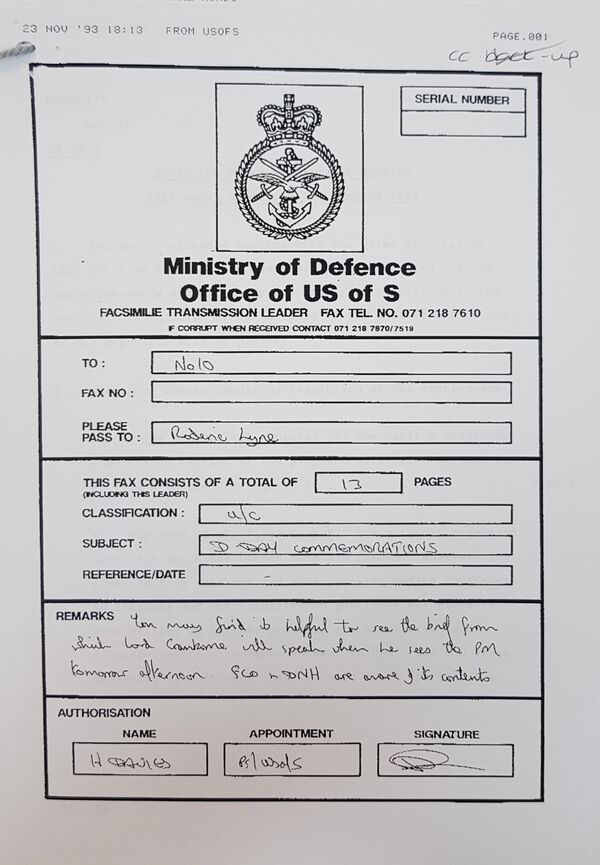 Interestingly enough, the files have just been reclaimed by the UK government, apparently for inspiration on how to deal with Russia this time around.

The 50th anniversary of D-Day was deemed to be an event of great historic significance and the British government was meticulously selecting guests of honour from among foreign heads of state and government. The list was impressive and was copied almost to the dot for the 75th commemorations:

"It is intended to invite the Heads of State or Government from: Australia; Belgium; Canada; France; Holland; Luxembourg; New Zealand; Norway; Poland and the USA. The FCO are at present actively considering this list. We are also in discussion with the FCO about the level of representation to be fielded by Germany and South Africa". 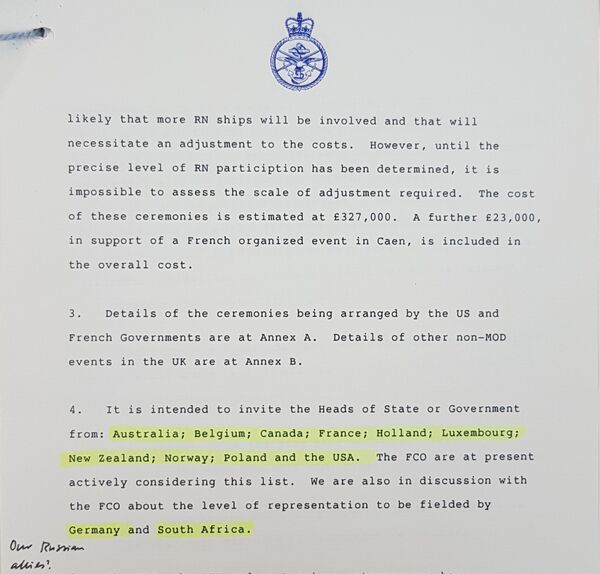 It was suggested that the commemoration arrangements "should attempt to include countries from Central and Eastern Europe as far as possible".

There was one glaring omission from the list that should have been obvious to everyone who went to secondary school. The only person who noticed the omission, though, was Prime Minister John Major (hats off to Rutlish Comprehensive, his alma mater). He scribbled on the proposed list of foreign guests a simple question: "our Russian allies?"

The Whitehall mandarins were quick off the mark: "the Russians had no role" in D-Day, so why bother inviting them? The then junior defence minister, Viscount Cranborne, sought to reassure the prime minister:

"Concerning the Russians I am rather more relaxed as to whether they are invited or not. We are commemorating D-Day, not the defeat of Germany, and the Russians had no direct hand in the former". 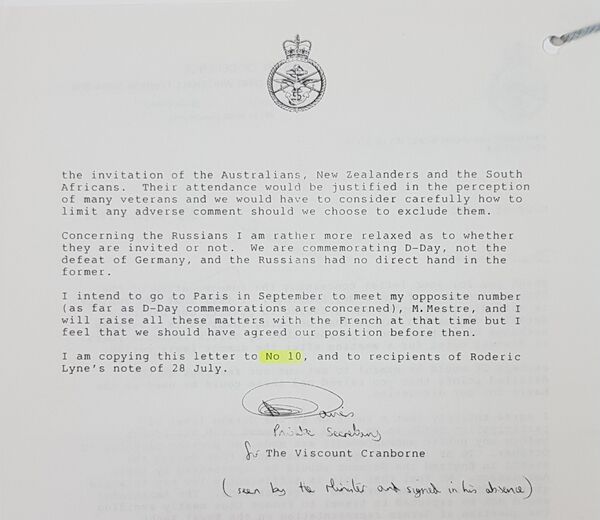 Had the Viscount consulted leading British historians, as John Major asked him to do, he would have learned that D-Day would have been impossible without the Russians. They tied up 228 Nazi divisions on the Eastern front, whereas only 11 divisions were defending the Normandy beaches on D-Day.

The casualty statistics are revealing:

More than 4,000 Allied soldiers and about the same number of German troops died on D-Day. Up to 20,000 French civilians were reportedly killed in the bombings.

From this perspective, D-Day looks like a diversion tactic to help the Red Army's strategic task of finishing off the largest and strongest German Army Group Centre. While the Western allies were struggling to break out of the Normandy beachheads, the Russians advanced 450 miles into the heart of Poland, smashing almost 20 German divisions and severely crippling 50 more. This was a much bigger rout than at Stalingrad a year before.

At no time following D-Day did the German high command contemplate transferring forces from the East to the West to counter the Normandy landings. To the contrary, the June offensive by the Red Army forced Hitler to redeploy 46 divisions, including some from France, to the Eastern front. The decisive factor in the successful landings — Allied air superiority — was due to the fact that most German warplanes were engaged on the Russian front.

By the time the Western Allies opened the Second front, the Red Army almost didn't need it.

With the Russians "out of the way" for the 50th anniversary celebrations, the British and French attention turned to the question of how to avoid offending German "sensitivities".

"[W]e should find an appropriate way of handling the German angle, and of avoiding trampling on German sensitivities.

From the German point of view, it would be best either not to invite he Russians, or to have them represented at an inconspicuously low level…"

Then Defence Secretary Malcolm Rifkind suggested that the best way to deal with German sensitivities would be "to take forward the spirit of reconciliation".

And herein lies the difference between Western and Soviet/Russian experience of and attitudes to the Second World War. For the West, WWII was basically a continuation of WWI — a war among old rivals to settle the scores from the Great War of 1914-1918. The Germans never planned to exterminate the British or the French. For the peoples of the Soviet Union it was a different kind of war — a mortal struggle for their very survival at the hands of the Nazis, whose ultimate goal was to eliminate or enslave every living being in the USSR.

In his account of the fighting in France in 1944, the leading light on the history of WWII, Max Hastings cites a German tank officer's reaction to a temporary ceasefire in Normandy to allow both sides to retrieve their dead and injured. In Russia, the officer said, "we would have driven straight over them".

No one is questioning the courage and sacrifice of Private Ryan on Normandy's, beaches but it was Private Ivan who tore the guts out of the Nazi war machine at Stalingrad, Kursk, and in Belarus. Together they delivered the double whammy that knocked out the Nazis.

Today's Western politicians, suffering from amnesia, should take their cue from Admiral Ramsay, Allied Naval Commander-in-Chief Expeditionary Force, who issued this Special Order of the Day to each officer and man departing for the Normandy beaches:

"It is to be our privilege to take part in the greatest amphibious operation in history — a necessary preliminary to the opening of the Western front in Europe, which in conjunction with the great Russian advance will crush the fighting power of Germany". 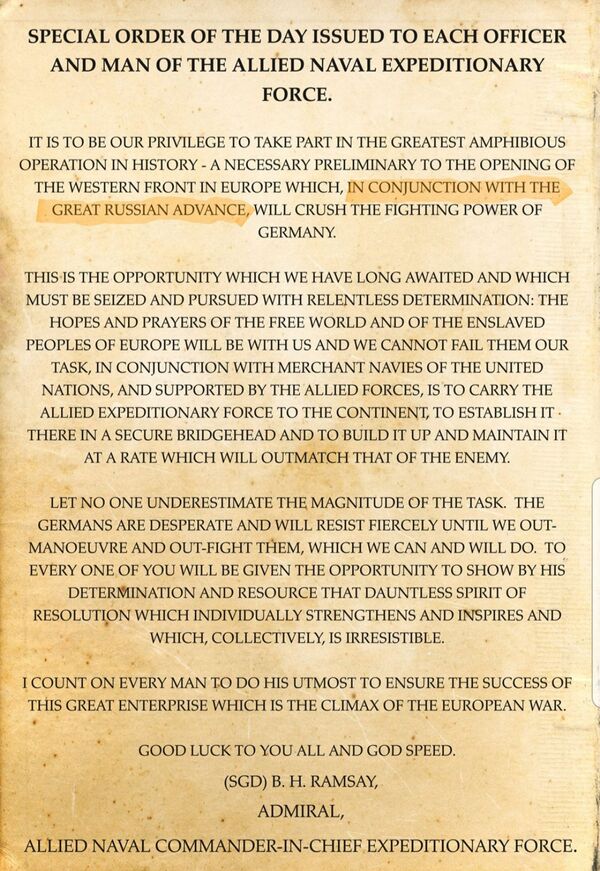