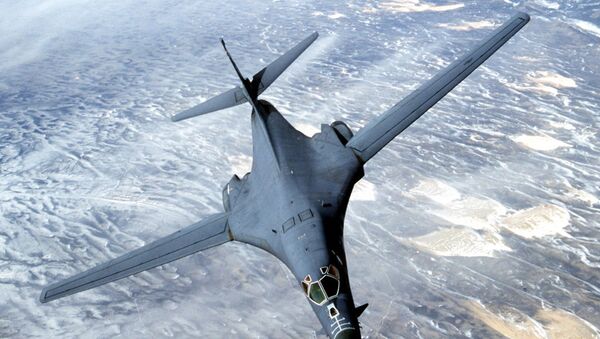 The Pentagon’s fleet of B-1B Lancer supersonic bombers is showing its age, and according to a Congressional panel, is in need of serious repairs. Of the 62 Lancers, fewer than 10 are mission-capable.

According to the House Armed Services Seapower and Projection Forces Subcommittee, issues with combat readiness among the B-1B fleet places US long-range strike capabilities "at increased risk," thanks to a host of structural problems associated with the bombers' age.

World
US B-1, B-52 Bombers Join 'Ample Strike' Exercise in Czech Republic - Pentagon

Now, House lawmakers are seeking to force the Air Force to update the House Armed Services Committee on a plan to improve B-1 readiness by March 1 of next year, Air Force Magazine reported.

"The committee is concerned B-1 readiness does not have the priority and resources to improve B-1 mission-capable rates," the bill states, introduced by the subcommittee Monday. "This is evidenced by fully mission-capable aircraft currently in single digits and aircrew being rerouted from flying the B-1 to other aircraft due to lack of B-1 aircraft for training."

Air Force Times notes that some of the myriad problems suffered by the Lancers include malfunctioning ejection seats — for which the jets have been grounded twice in the last year — and a fire that broke out on one bomber's wing last summer.

The plan will have to detail how the service will fix the B-1Bs' problems, as well as how it will mitigate future problems before they get as bad as they are now.

Another Near-Accident Aboard US B-1B, But Pentagon Chief Plays Down Problem

In fiscal year 2017, the most recent year for which data is available, the Air Force reported that only 32 or 33 of its 62 B-1Bs were ready to fly at any given moment; however, now the rate is so low that fewer than 10 are ready to fly. The situation has forced B-1B crews into other aircraft, as there aren't even enough for them to carry out their necessary training, Air Force Times reported.

In a Wednesday statement, Air Force Global Strike Command told reporters it was conducting an engineering review of its B-1B fleet.

Built by plane maker Rockwell (now a part of Boeing) in the 1980s, the B-1B was a rebooted strategic bomber program intended to plug an important gap in US nuclear and conventional strike capabilities, as the sluggish B-52 became increasingly vulnerable to Soviet anti-air defenses and the B-2 Spirit stealth bomber program wouldn't be ready for years to come. Thus, it was packed with some of the most advanced avionics systems and structural improvements, including a reduced radar cross-section, then possible.

It's expected the aircraft will begin to be retired as Northrop Grumman's B-21 enters service beginning in the late 2020s.