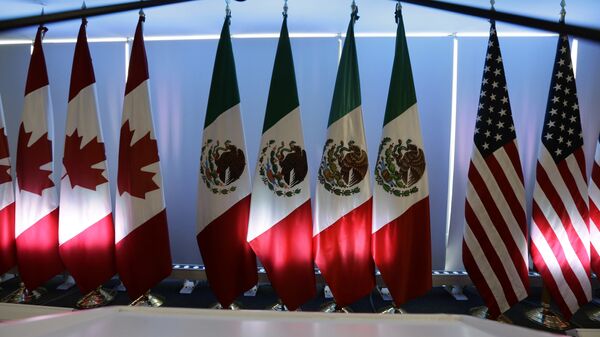 Several Mexican officials are currently in Washington, with meetings with a number of US officials scheduled for this week. Sources familiar with the talks say this is Mexico’s behind-the-scenes channel of sending a message to the White House.

While Mexico has officially taken a friendly posture seeking to avert direct conflict with the US, Mexican officials behind the scenes have sent messages to the Trump administration that Mexico is prepared to fight with the trade tariffs Washington has threatened to impose.

During the weekend, the Mexican Foreign Secretary Marcelo Ebrard met with US State Department officials in Washington to attempt to find a way around a tariff war between the two Northern American nations. According to NPR, the meeting is part of a "public push" led by Mexican officials to warn Washington of the "disastrous consequences" if Trump goes through with threats to impose compounded 5% tariffs on imports from Mexico.

"They're going to have to delicately balance inflaming tensions even further, as this could be horrific for both countries, but particularly the Mexican economy," an unnamed former White House official said in an interview. "But you can't just roll over and play dead if you're verbally attacked like this by a foreign government's president. That doesn't play well, domestically."

Trump's Mexico Tariff Threat Could Affect Entire US - Report
US President Trump threatened to impose an import tariff on Mexico as a form of punishment for Mexico's inability to curb illegal migrant flows to the US border. Trump wants the southern neighbour to take stronger steps along its southern border, dismantle human smuggling chains and improve coordination with Washington on the asylum process.

Mexico's representatives say a better solution to the immigration issue is an investment into the impoverished Central American nations where the vast majority of the immigrants come from.

Ebrard is currently in Washington, along with Economy Minister Graciela Márquez and Agriculture Minister Victor Villalobos. During their visit, the officials are scheduled to meet with US Commerce Secretary Wilbur Ross, Agriculture Secretary Sonny Perdue, acting head of the Department of Homeland Security Kevin McAleenan and US Trade Representative Robert Lighthizer. On Wednesday, Ebrard is expected to meet with US State Secretary Mike Pompeo, NPR report says.

Speaking at a press conference on Monday, Marquez also said Mexico will retaliate for the newly imposed tariffs.

"I cannot say that we're are going to do the same [tariffs], because we have to make a strategic plan to take into account aspects of the commercial relationship," Márquez said, according to NPR. "We do not want to use tariffs to damage supply chains, job creation or investment."

US President Trump has repeatedly called on Mexico to stop immigrants from Central America from coming to the US. In response, Mexico tried to offer migrants' refugee status, housing and jobs and bolstered law enforcement on main roads across the country. Despite all measures, migrants continue to arrive at the US southern border in hundreds and cross into US territory illegally.