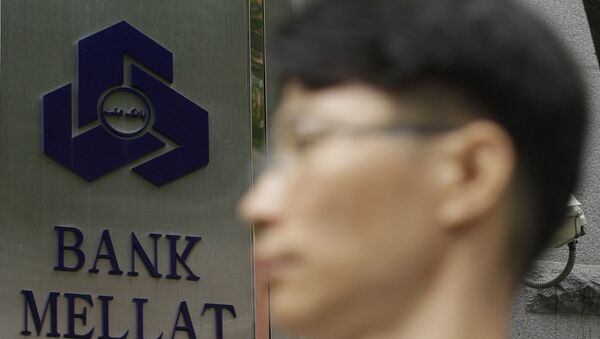 The UK's Supreme Court has already ruled that the government's move to sanction Mellat Bank in 2010 was unlawful, with the private Iranian bank saying the restrictions against it had damaged its reputation and led to substantial financial losses, including the loss of future business.

Mellat Bank and the UK Treasury are set to face off in a UK High Court later this month, with the bank expected to present evidence that the British government's 2010 move to freeze assets, introduce sanctions and encourage other international actors to do the same were illegal, The Mail on Sunday has reported.

The trial, set to kick off on 17 June and run five weeks into July, is expected to see the court call high-profile current and former government ministers, including Labour MP Alistair Darling, who served as chancellor of the exchequer in Prime Minister Gordon Brown's government when the asset freeze and sanctions were introduced.

At the time, the UK Treasury claimed that Mellat Bank had provided support for Iran's missile programme, and its suspected nuclear programme. However, in January 2013, the European General Court struck down EU sanctions against the bank, saying there was no evidence to support claims that the bank was in any way involved in these programmes. Later that year, the UK's Supreme Court similarly ruled that the allegations were unlawful.

The Treasury is reportedly expected to base its defence on the assertion that Iran's suspected nuclear weapons programme "posed a risk to the UK's national interest", helping to determine its policy toward the Iranian bank, with these "concerns" serving as "ample justification for taking action".

'Whoever Owns Gold, Has Power': UK Media Paranoid Over Russia's Bullion-Buying
An attorney representing Mellat Bank earlier said the financial institution's total losses may have actually amounted to up to $4 billion, with Iran's PressTV suggesting that this could mean that Iran may file litigation against the European Council over its sanctions against the bank as well.

Mellat Bank is 80 percent privately owned, with the Iranian government said to hold a 20 percent stake.

Iran has faced a 40 plus year ordeal affecting its financial operations and assets worldwide. After the Islamic Revolution of 1979, the US froze tens of billions of dollars' worth of Iranian state and private assets. US court rulings have chipped away at these funds through cases accusing Iran of involvement in international terror plots, with Tehran fervently denying these claims. The US's European allies and other countries have joined US sanctions and other restrictions against Iran over the country's suspected nuclear weapons programme.

In 2015, Iran, the US, Russia, China, the UK, France, Germany, and the EU signed the Joint Comprehensive Plan of Action, a nuclear deal offering Tehran sanctions relief in exchange for a commitment not to develop nuclear weapons. The Trump administration walked out of the deal in May 2018, gradually restoring US sanctions against Iran. On the one year anniversary of the decision, Iran announced that it would exit some of its commitments under the deal, citing other signatories apparent inability to find workarounds to US pressure.