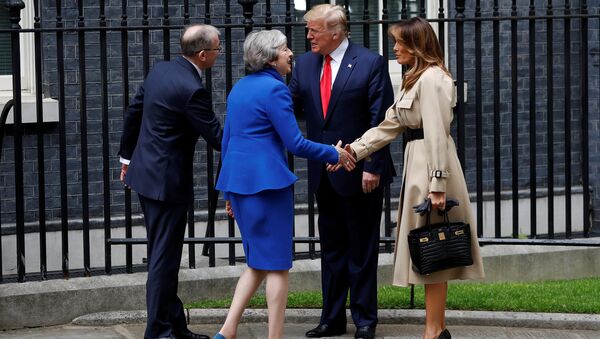 The US president’s handshake peculiarities have come under scrutiny before. Twitter users earlier pounced on the bizarre greeting Trump had for the Queen on Monday, appearing to grasp only the monarch’s fingers in his fist, suggesting similarities to a fist bump.

Footage has emerged of US President Donald Trump appearing to snub a handshake from outgoing UK Prime Minister Theresa May as they met, accompanied by spouses, outside 10 Downing Street.

The video shows the US president walking alongside Melania Trump and May accompanied by husband Philip.

The Conservative leader shook hands with the First Lady, while Philip did the same with Trump.

But when the two heads of state turned to face each other, they stopped short of shaking hands, instead opting for a brief exchange of words before posing for photographs.

Latest theory for Trump and May not shaking hands is that their combined hatred for minorities would've caused the electricity to trip in Downing St. pic.twitter.com/HnVdvFvQLb

As Twitter reacted to the gauche moment, some refused to read anything into this incident, claiming it’s possible the two may simply have avoided shaking hands because their respective other halves had blocked their way.

No Handshake / No Handholding this time……. "Donald Trump meets with Theresa May on second day of state visit" https://t.co/jTeL370GY9

Donald Trump arrives at No10 for talks – but DOESN’T shake hands with Theresa May https://t.co/J0eOvpI8pk pic.twitter.com/u5QhCw6CBZ

Handshake gaffe highlights chilly relationship between Theresa May and Donald Trump — but it wasn't always like this! No contact between pair but they had met earlier https://t.co/DEgfQ8iLte pic.twitter.com/JhGQbkfII4

Others were quick to claim the lack of handshake was on purpose.

We have a Handshakegate, I presume
No handshake between Trump and Teresa May
#TrumpUKVisit pic.twitter.com/gU4TserSK8

Don’t blame him.. why shake hands with a loser who lies and won’t take us out of EU…

He knows she used GCHQ to spy on him for Obama.

This isn’t the first time Trump's handshake has come under scrutiny during the UK visit.

Twitter users pounced on the bizarre greeting the US president had for the Queen outside Buckingham Palace yesterday, when Trump appeared to grasp only the monarch’s fingers in his fist as he was welcomed to the Palace. Photos provoked mockery on social media, where many likened it to a fist bump.

READ MORE: ‘He Makes His Own Rules’: Trump Patting Queen on the Shoulder Inflames Twitter

In another breach of protocol, Donald Trump appeared to have given Queen Elizabeth II a pat her on the shoulder when Her Majesty stood up to toast the US president.

Touching the Queen, especially in such a formal setting, is considered extremely gauche behaviour.