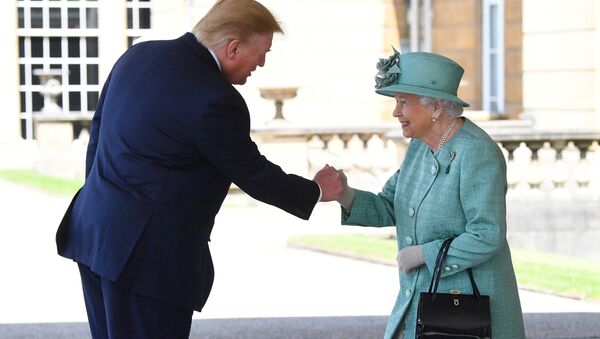 US President Donald Trump has arrived in the UK for his long-awaited official state visit. Widely and vocally opposed by British citizens in advance and boycotted outright by Labour party representatives, his critics may be wise to hold their fire.

Just before Donald Trump's Air Force One touched down at Stansted Airport, the president took to Twitter to express his sentiment about London Mayor Sadiq Khan, who over the weekend published an article for the Observer, suggesting it was "un-British" to "roll out the red carpet" for Trump, and accused the POTUS of invoking similar language to that used by 20th century fascists.

​The pair have been embroiled in a long-running war of words, which began in December 2015 when Khan dubbed Trump's proposal to block visas for residents of all Muslim countries "outrageous". The sparring has continued ever since — although Trump's response to the latest flare-up may be his most incendiary yet. Taking to Twitter via the airplane WiFi to launch a vicious broadside against the controversial Khan, calling him a "stone cold loser" who was "very dumb" and "incompetent", and mocking his diminutive physical stature.

As the Presidential jet touched down at Stansted airport, Foreign Secretary and Conservative leadership candidate Jeremy Hunt — who has pledged not to "stand in the way" of WikiLeaks founder Julian Assange being extradited to the US if victorious — was waiting on the tarmac. Hunt said the President had reiterated his "very strong views" about Mayor Khan during the brief official welcome, "consistent with what was in his tweet".

The Mayor's statements are but a fragment of a wider picture — British authorities expect widespread discord, and have taken a number of precautions to insulate the President from baying mobs, a safe bet given Trump's July 2018 visit saw protest actions erupt throughout the country. This time 13 percent of Londoners alone have indicated they're ‘likely' to join the large-scale 4th June demonstration in the capital — and coaches will be ferrying agitators to the event from cities such as Swansea, Manchester, Newcastle, Leeds, and Sheffield, among others, suggesting it could be among the biggest in the country's history. Labour leader Jeremy Corbyn has pledged to speak at the event.

However, some things authorities were unable to pre-emptively guard against — such as a teenager mowing the words "Oi Trump" and a vast depiction of a phallus into the lawn of his home near Hatfield, in the hope the President would spot it from the window of Air Force One as it approached nearby Stansted.

From Stansted, he flew by helicopter first to the US Ambassador's residence in London — where he complained about the lack of availability of Fox News on cable — before venturing on to Buckingham Palace.

A warm welcome from the Royal Family and presumably lavish lunch later, he journeyed to Westminster Abbey to lay a wreath on the ‘tomb of the unknown warrior', numerous official gun salutes blasting in key locations, including Green Park and the Tower of London, along the way — the din presumably somewhat drowning out the vicious anti-Trump chants echoing throughout central London.

​They won't be blasting for the duration of his visit though — and Lindsey German, a key organizer of the assorted protests in the capital, says such actions are scheduled for every day of the President's stay.

"We want to send a message that the President isn't welcome here. Before he even landed in Britain he managed to insult the London Mayor, causing a lot of anger in the process. His policies are completely divisive and reactionary, he's talking up war with Iran and has supported Israel's latest actions against the Palestinians. This is a lame-duck government without authority, so this is a protest against our own leaders as well," she explains.

​A lame duck government the current administration certainly is — lacking a parliamentary majority, a Prime Minister who's failed to achieve any of her key policy goals in her nigh-on three years in office, and a leadership race in which 13 candidates have thrown their proverbial hats into the ring (Former Chancellor Ken Clarke has called the contest a "shambles") — and it's unclear whether the next leader will be able to complete a Brexit deal satisfactory to parliament, the Conservative party and EU chiefs, whoever they are.

In that event, the UK will likely leave the EU 31st October with ‘no deal' — and while opposition to Trump is a popular sentiment — a May YouGov poll indicated 63 percent of Britons think Trump has been a "poor or terrible" leader, the figure rising to 71 percent in London, and 72 percent in Scotland, he's indicated a strong willingess to support the UK if the EU refuses to yield to British demands in an exclusive interview with The Times, promising a subsequent trade deal with the US would more than compensate the country for any economic damage such a departure inflicts. Similarly, while other EU member state chiefs have implored Britain to kowtow to all Brussels' demands, including paying the £39 billion ‘exit fee', Trump has suggested withholding the sum to gain leverage.

​"If I were them I wouldn't pay…That is me. I would not pay, that is a tremendous number. If [the government] don't get what they want, I would walk away… If you don't get the deal you want, if you don't get a fair deal, then you walk away," he concluded.

​Moreover, for all the protests planned, polling suggests more Britons support than oppose his visit, with YouGov reporting 28th May a majority (46 percent) were in favour of it going ahead. As the pollster notes, state visits "are a way for nations to affirm their friendship and forge new ways of working together".

Should a no deal scenario come to pass, suffice to say Britain will need all the support it can get from its various international ‘friends'. In his blistering morning put-down of Khan on Twitter, he stated despite Sadiq Khan's rebuke he eagerly awaiting "being a great friend" to the UK and "looking very much forward" to his visit — given such sentiments it may be unwise for Londoners to antagonise him, or the country he leads.