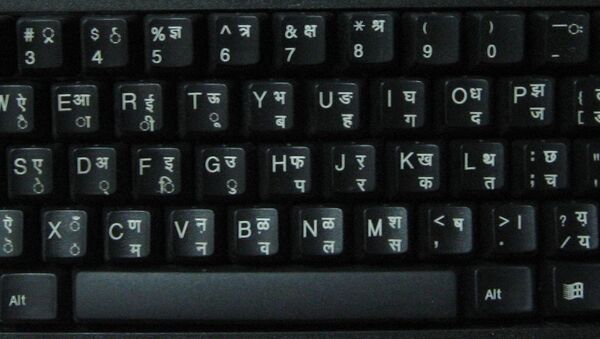 CC BY-SA 3.0 / Suresh Kumar Shukla / Devanagari INSCRIPT Keyboard
Subscribe
The original draft National Education Policy (NEP) led to criticism and an outcry on social media, with many alleging that the government was seeking to impose the Hindi language in states where it is not the original language nor an established form of communication.

New Delhi (Sputnik) — Facing criticism for insisting the Hindi language be used as one of the three languages as a medium of instruction across the country, India's HRD Ministry on Monday clarified it was just a draft of its new education policy.

The original version of the policy contained a controversial three-language formula recommending the inclusion of English, Hindi and the mother tongue in non-Hindi states, while Hindi-speaking states were to include English and one other Indian language from any part of the country.

The policy will be finalised after public feedback and all state governments' views are expressed, the government has since clarified.

The government has tweaked the new draft National Education Policy (NEP) 2019, making the inclusion  of Hindi optional. It now states: "In keeping with the principle of flexibility, students who wish to change one or more of the three languages they are studying may do so in Grade 6 or Grade 7, so long as they are able to still demonstrate proficiency in three languages (one language at the literature level) in their modular Board Examinations sometime during secondary school."

193 Years of Hindi Journalism Marked With Cyclothon in India (VIDEO)
The public outcry was noticeable on social media.

​Cutting across party lines and political affiliation, leaders in India's southern states of Tamil Nadu and Karnataka in particular opposed the original draft policy which described multi-lingualism as a necessity in India as much as it is in other parts of the world.

India's Human Resource Development (HRD) Minister Ramesh Pokhriyal Nishak told the ANI news agency over the weekend that his ministry had received the recommendations of the committee that had been assigned the task of drafting the New Education Policy.

"The report of the committee is only received by the Ministry. That's not the policy. No language will be imposed on any state," the minister said.

Though Hindi is used as an official language in the Central Government, English holds the importance of being a provisional official sub-language. However, any State legislature holds the freedom to adopt any regional language as that State's official language. In brief, there is no one common "national language" imposed across the country. The language report of Census 2011, released in June 2018, listed the number of speakers of 22 scheduled languages (those in the Eighth Schedule of the Constitution) and of 99 nonscheduled languages, including English, Tulu and Khasi, all of which have more than 10,000 people calling them their mother tongues.

Nearly 528 million people, or 44% of the population, mentioned Hindi as their mother tongue. The other top languages — Bengali, Marathi, Telugu and Tamil — accounted for over a quarter of the population.