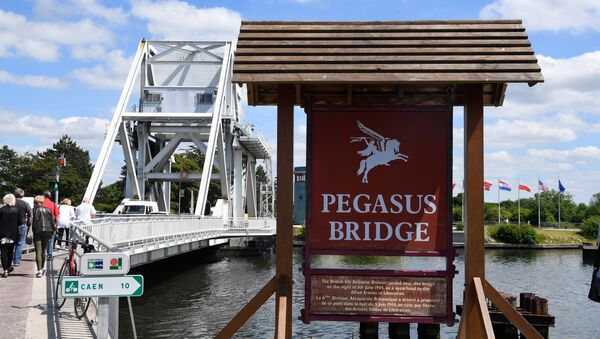 On 6 June 1944 a force of 156,000 British, US and Canadian soldiers crossed the English Channel and gained a vital beachhead on the French coast, opening the "second front" to relive pressure on Russian forces fighting the Germans in eastern Europe.

A British soldier has died in mysterious circumstances in northern France while swimming across a canal in the run up to ceremonies on Thursday, 6 June, to mark the 75th anniversary of the D-Day landings.

A British Army spokesperson was unable to give a cause of death for the soldier, who drowned in a canal in the early hours of Sunday, 2 June close to Pegasus Bridge in Normandy.

The Army spokesman said: "It is with sadness that we must confirm the death of a service person in France. Our thoughts are with their family at this difficult time."

Thousands of people are expected in Normandy this week to mark the D-Day landings and US President Donald Trump will be joining Britain's outgoing Prime Minister Theresa May and other leaders at a special anniversary commemoration ceremony in Portsmouth on Thursday.

The 30-year-old soldier, who was stationed at Ranville, near Caen, was with a group of servicemen who are in the area for the anniversary.

The office of the administrator for the Calvados region said he had tried to swim across the canal at Benouville near Pegasus Bridge, which was named in honour of the British 6th Airborne Division which used the winged horse as its emblem.

He vanished at 11pm local time on Saturday, 1 June, and his body was fished from the canal at 3am.

​During Operation Deadstick on 6 June 1944 paratroopers from the 6th Airborne Division landed near the bridge and secured it before the Germans could blow it up, allowing the invading forces at nearby Sword Beach to use it to move inland from the liberated pocket on the seaward side of the Caen Canal.

Twenty British paratroopers were killed during Operation Deadstick, a tiny fraction of the Allied dead during the D-Day landings.

D-Day marked the beginning of the end for Hitler's regime.

The German army was already retreating from the Red Army, which had turned the tide at the Battle of Stalingrad, and the Nazis finally fell in May 1945, 11 months after Allied forces overcame German defences in Normandy and began liberating northern France.