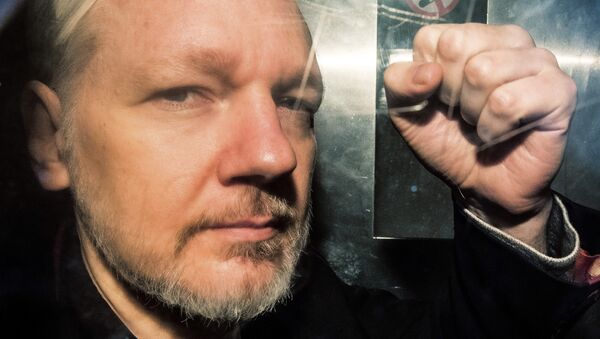 Assange was arrested in London inside Ecuador's Embassy in April and sentenced to 50 weeks in prison for jumping bail in 2012 to avoid extradition to Sweden. Swedish authorities dropped their charges of sexual assault against the whistleblower in 2017, but reopened the case in mid-May.

The Uppsala District Court has rejected prosecutors' request to detain WikiLeaks founder Julian Assange in absentia in the suspected rape case against him, thus blocking prosecution efforts to extradite him to Sweden to face trial.

“One of the reasons for the prosecutor’s office to request an arrest was the need to continue the investigation, but the previous arrest warrant was issued when Assange was at the Ecuadorian embassy, while now he is serving a prison sentence in the UK,” the Uppsala district court's lead judge said. "Currently, the arrest of Assange in absentia seems to be a disproprtionate measure," she added.

The court ruled to hold Monday's hearing behind closed doors after a request by Assange's legal team in a move aimed at protecting the whistleblower and the woman whom Assange is accused of raping. Assange maintains his innocence in the case.

Assange's lawyer said his client would be willing to come to Sweden to cooperate with investigators, and said the whistleblower has nothing to hide.

Monday's ruling does not mean that Swedish prosecutors' case against the 47-year-old has been dropped, and he could still be questioned in Britain, where he is currently serving a prison sentence for skipping bail.

Persson told reporters that she has not yet decided whether to appeal the ruling. "I will also issue a European Investigation Order in order to interview Julian Assange," she said, noting that she has yet to pick a date for questioning.

Assange took refuge in the Ecuadorian Embassy in London in 2012 after an extradition request by Swedish authorities over allegations of sexual assault and rape. The Ecuador government withdrew its asylum for Assange on April 11, with British authorities immediately arresting him and dragging him out of the embassy against his will. The whistleblower is presently serving a 50-week prison sentence for the 2012 bail skip.

Swedish Court Holds Press Conference Over Alleged Assange Rape Case (VIDEO)
Late last week, US media reported that the Justice Department has apparently backed down on plans to charge Assange for the infamous Vault 7 document leak due to time constraints and concerns that the move would only result in the leak of more classified information. Last week, the DoJ indicted Assange on 17 charges under the Espionage Act, accusing him and his website of illicitly searching for, obtaining and disseminating classified information whose disclosure could "harm the national security of the United States." If convicted Assange would face a maximum sentence of 175 years behind bars.

Meanwhile, Assange's attorneys, members of his family and WikiLeaks have expressed concerns over his health. He was recently transferred to a prison hospital in serious condition after one of his lawyers found him to be incoherent in advance of a planned court hearing. In a report released Friday, UN Special Rapporteur on Torture Nils Melzer indicated that there was "overwhelming" evidence that Assange was exposed to "psychological torture" over a period of years during his stay in the Ecuadorian Embassy.