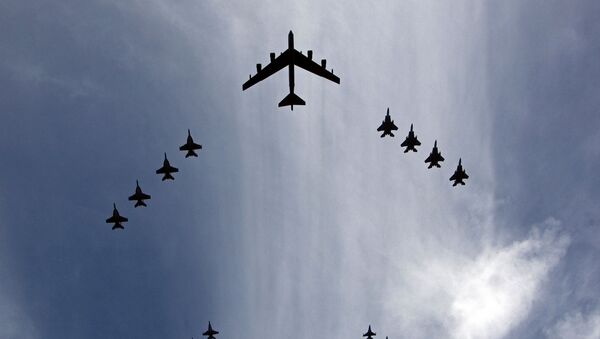 The Western alliance has come under increasing strain in recent years amid President Trump's insistence that NATO's European members commit more to defence spending, and reports that the president has repeatedly raised the issue of withdrawing Washington from the bloc.

The Trump administration has presented America's European allies with an "ultimatum" demanding that the countries make changes to their defence policy to ensure that Europe remains closely linked to US defence manufacturers in the creation of new arms, El Pais has reported, citing documents from a meeting in Washington, DC on 22 May between US officials and members of the EU's Political & Security Committee.

According to the Spanish newspaper, US officials warned their EU counterparts that they may be left alone in the face of threats, supposedly including Russia, if Brussels rejected the US defence companies' participation in the creation of new weapons systems.

At the meeting, State Department Deputy Assistant Secretary for European and Eurasian Affairs Michael Murphy reportedly warned European officials that EU members' citizens "would not be impressed" if, in the event of a crisis and the failure of European defences, the continent was armed only with European weapons.

In addition, Murphy also warned that "if the language" of Europe's arms development legislation and guidelines were not changed to allow US participation, "the EU will have to choose: either renounce the use of the best technological capabilities which exist or develop their own." Murphy also hinted that the lack of interoperability between US and EU weapons systems may mean that at some point, their armies may not be able to fight together in defence of the continent from external threats.

TOTAL COST of 'Sudden' US Withdrawal From NATO Revealed by Think-Tank
The 22 May meeting was reportedly aimed at reaching common ground on the issue of the standards of the European Defence Fund and arms projects for the Permanent Structured Cooperation Program, an initiative launched by Brussels in 2017 attempting to increase Europe's independent military power which the US has complained prevents companies from outside the EU from taking part.

The warning was the latest in a series of threats by Washington going back to late 2018 amid European efforts to develop independent military capabilities. Last month, the Financial Times reported that Washington had threatened the EU with 'retaliation' if the bloc went ahead with its plans, with US undersecretaries of defence and state Ellen Lord and Andrea Thompson sending a letter to EU chief diplomat Federica Mogherini expressing their 'deep concern' over the EDF and PESCO's proposed rules. "It is vital…that independent EU initiatives like EDF and PESCO do not detract from NATO activities and NATO-EU cooperation," the letter said.

In March, US Ambassador to Europe Gordon Sondland accused Brussels of "stubbornness" and "protectionism" with its defence project rules and warned the US might respond with actions which wouldn't "be positive for either side."

According to El Pais, undersecretary Murphy's comments represent "the biggest threat by Washington since Brussels began to promote the Defence Union."