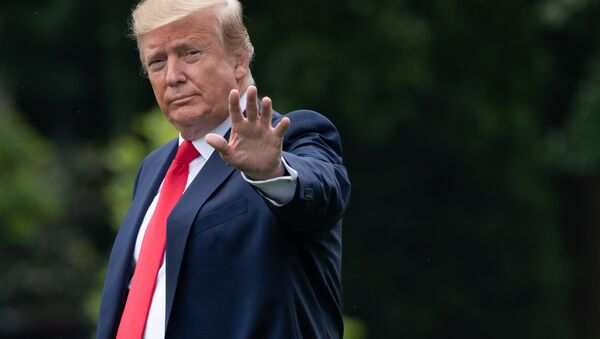 Earlier, as US President Donald Trump was interviewed by the British outlet The Sun ahead of his state visit to the United Kingdom, he said he was surprised to learn that Meghan Markle, Duchess of Sussex, had made “nasty” comments about him.

US President Donald Trump has taken to Twitter to dismiss claims that he called the Duchess of Sussex "nasty". He added that these rumours were spread by "fake news media", singling out CNN and the New York Times.

I never called Meghan Markle “nasty.” Made up by the Fake News Media, and they got caught cold! Will @CNN, @nytimes and others apologize? Doubt it!

​An official Twitter account for US President Donald Trump’s 2020 reelection campaign, meant to promote pro-Trump messages and combat “fake news”, was mocked by Twitter users as it pushed back at CNN on Saturday, claiming the outlet had misrepresented Trump’s comments about Meghan Markle, Duchess of Sussex.

Denouncing the claims that Trump had called a member of the British royal family “nasty”, the “War Room” account tweeted:

“Here is what he actually said. Listen for yourself!” and proceeded to post a captioned video.

Fake News CNN is at it again, falsely claiming President Trump called Meghan Markle "nasty." Here is what he actually said. Listen for yourself! pic.twitter.com/kLuPXBLMhf

In the audio the US President can clearly be heard saying:

“No, I didn’t know that she was nasty,” when answering the question on whether he knew the Duchess of Sussex was not exactly “nice” about him during his 2016 election campaign.

Trump added he was not aware that Markle had called him “divisive” and “misogynistic”, but noted it was “nice” to have an “American princess” as part of the British royal family and added he was sure she would “do excellently.”

Predictably,Twitter exploded, with many noticing that while the whole point of the posting the audio was to slam CNN for “fake news”, the video achieved the opposite as the president actually did call Markle “nasty”.

They insist Trump never called Markle “nasty” and the proof is audio — and their own subtitles — showing he called her “nasty.” pic.twitter.com/X3ISM8XzA5

This is a huge self own if I've ever seen one. pic.twitter.com/cIv7dxi5gf

Maybe @TrumpWarRoom should practice first with some minor skirmishes or regional conflicts before tackling all out war. Just saying.

He actually calls her “nasty” in this audio. That is the exact word he uses. Who is running that war room? George Orwell? https://t.co/6X5Dl979oI

​However, some twitter users defended the idea that the president did not call Meghan Markle “nasty” and suggested his words had been misinterpreted and taken out of context:

yep if you have no concept of the English language.

Honestly, I expect more from the NYT and you in particular. He is saying he didn't know she had said nasty things about him. He DID NOT call her nasty. You're playing right into the Fake News canard. So easy to lose your credibility.

He didn't say she was a nasty person. He said he didn't know she was nasty toward him while he was campaigning. He said he thought she would do a great job as duchess. This is #fakenews at its finest. You do get the difference between an adjective and an adverb, right?

Trump didn't say what his words said — he said something else, but the lying fake news reported the words he actually said, and tried to say he said what they said!

​Meghan Markle will miss next week’s functions during the US President’s state visit to the UK, as she is on maternity leave with her three-week-old son Archie.

Trump told The Sun that he didn’t know he would not be meeting the Duchess, and said: “I hope she is OK.”

Markle’s husband, Prince Harry, Duke of Sussex, will reportedly join the US President for a private lunch in the framework  of the visit, as will Prince William.