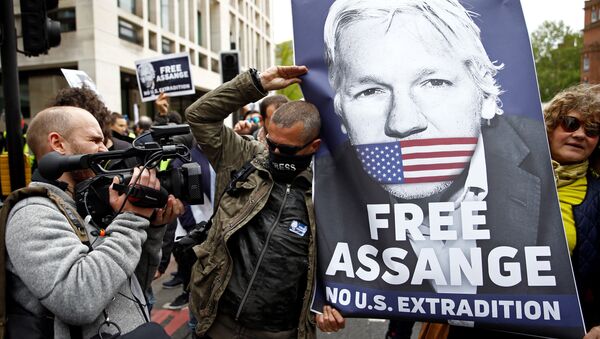 © REUTERS / Henry Nicholls
Subscribe
International
India
Africa
Meanwhile, US prosecutors are said to have backed down on plans to charge Assange for the infamous Vault 7 leak because of time constraints and concerns that such a move could result in the leaking of more classified documents.

Jeremy Hunt, the UK's foreign secretary who is tipped as a frontrunner to replace Theresa May as Tory leader and prime minister, said he wouldn't block the extradition of disgraced whistle-blower Julian Assange to the United States.

Referring to the espionage charges brought forward by US prosecutors, Hunt argued that it is "absolutely right that he (Assange) faces justice and he has no more reason to escape justice than anyone else who is alleged to have committed crimes."

His statement came hot on the heels of reports that the US Justice Department won't go after Julian Assange over his role in exposing the CIA's global secretive hacking programme.

This refers to the so-called Vault 7, a cache of over 8,700 documents disclosed by WikiLeaks in 2017 which detailed the CIA's cyber operations and stealth hacking tools including viruses, trojans and other "weaponised" malware.

According to the Vault 7 leak, a software development group within the agency's cyber intelligence unit has built malware capable of hacking into smart phones, Microsoft Windows and Mac OS X, Linux, as well as removable media, routers and smart TVs.

The documents also indicated that the CIA had been using the US consulate in Frankfurt, Germany as a covert base for hackers operating in Europe, Africa and the Middle East.

Although the CIA has neither confirmed nor contested the authenticity of the disclosed files, they are understood to be genuine, according to statements by former CIA staffer Edward Snowden and unnamed government officials.

The US government won't press charges against Assange over the Vault 7 leak because US prosecutors have apparently failed to bring additional charges (as required by extradition law) within 60 days of the first indictment, which was filed on 6 March over his connection with leaks by former US Army intelligence analyst Chelsea Manning.

Moreover, prosecutors are said to be worried that the Vault 7 documents, if they were to surface in court, would lead to the exposure of more intelligence secrets, Politico reported on Sunday, citing sources with knowledge of the matter.

Julian Assange is currently serving a 50-week jail term for a bail offence to avoid extradition to Sweden — a sentence WikiLeaks editor-in-chief Kristinn Hrafnsson described as an "outrage".

Assange broke bail conditions in 2012 and took refuge in the Ecuadorian Embassy in London at a time when Swedish prosecutors wanted him over allegations of sexual assault and rape, which he denied.

The US Justice Department, meanwhile, indicted the 47-year-old whistle-blower last week on 17 charges under the Espionage Act, claiming that he and his anti-secrecy website "have repeatedly sought, obtained, and disseminated information that the United Sates classified due to the serious risk that unauthorised disclosure could harm the national security of the United States".

These new accusations came on top of a single count of conspiracy with Chelsea Manning to hack into a government computer in a bid to access classified military reports about the US-led wars in Afghanistan and Iraq as well as information about detainees in Guantanamo Bay.

Manning was sentenced to 35 years in jail in 2013 after she was found guilty of violating the Espionage Act. But in January 2017, Barack Obama commuted all but four months of the remaining sentence and she was released in May later that year.

As for the separate Vault 7 leak, the Justice Department has charged one person so far. Joshua Schulte, a former CIA coder, was indicted in 2017 for leaking the documents to WikiLeaks. He has pleaded not guilty and his trial has been pushed to November 2019; if convicted, Schulte faces up to 135 years in prison.