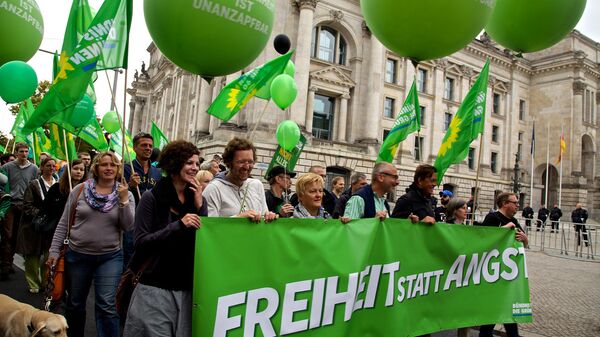 For the first time in history Germany's Green Party has got the better of Chancellor Angela Merkel's ruling coalition in a German poll.

The Greens received a 27 per cent approval rating in the Forsa pollster’s survey, showing an increase of 9 percentage points over the past week.

This comes a week after the Greens managed to emerge as Germany’s second-strongest party in the European Parliament elections which saw them gaining a historic 20.5 per cent of the vote. The party won 21 seats, doubling its previous holding.

EU Elections Will Define the Future of ‘Christian European Culture’ – Hungary PM
The CDU/CSU and its junior coalition partners, the Social Democrats (SPD), obtained 28.9 per cent and 15.8 per cent, respectively, suffering historic losses in the 23-26 May elections.

The CDU/CSU lost five seats, ending up with 29, while the SPD’s figures stood at 16 and 11, respectively.

During regional parliamentary polls in Bavaria in October 2018, the CDU/CSU got only 37 per cent of the vote — 10 per cent less than in 2013.
The SPD also lost 10 per cent, attracting only 9.7 per cent, while the Greens received almost 17.5 per cent.