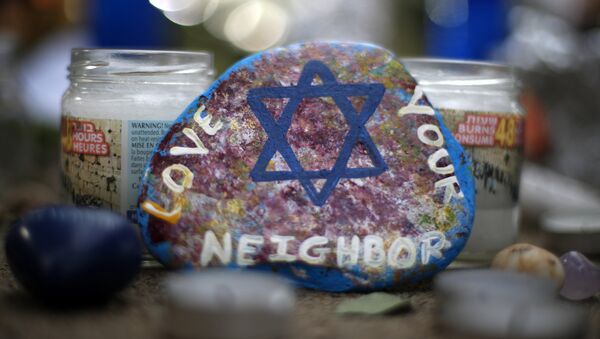 The resolutions were drafted by the left wing of the California Democratic Party, who opposed the "conflation" of support of Palestinians with anti-Semitism and claimed that the Israeli government had indirectly inspired the atmosphere that led to the Pittsburgh synagogue massacre.

The Democratic Party's convention in California has toned down several resolutions containing harsh criticism of Israeli authorities and indirectly linking the Israeli government with anti-Semitism.

The Resolutions Committee of the California Democratic Party has rewritten four of the resolutions over the weekend, according to The Jewish News of Northern California, leading their original authors to withdraw their names and co-sponsorships.

One resolution demanded, in its initial version, that the Democratic Party oppose "all efforts to stigmatise and suppress support for Palestinian human rights by falsely conflating it with anti-Semitism."

Another would have required Democrat officials work toward rolling back President Trump's pro-Israel policies, including his recognition of Israeli sovereignty over the disputed Golan Heights.

Furthermore, another document urged party officials to take a subsidised trip to Israel only "if they undertake to devote an equal amount of time to visiting Palestinian towns, villages and refugee camps in Israel and the occupied Palestinian territories."

And another draft resolution accused the Israeli government of supporting "Christian fundamentalist and ultra-right groups" in the United States and elsewhere — a policy progressive Democrats claimed contributed to an upsurge of anti-Semitic sentiment that led to the October shooting at a Pittsburgh synagogue, in particular.

David Mandel, a California Assembly delegate, said it would be "far-fetched" to say the resolution "directly" blames Israel for boosting anti-Semitism, but that "Israeli government is aligning itself with right-wing government's around the world… and those right-wing groups — a core tenet of their ideology is anti-Semitism."

Two resolutions also reportedly supported passing the Golan Heights over to Syria. It is unclear, however, which of the six resolutions were withdrawn and which were rewritten.

Pro-Israeli lobbyists were quick to praise the decision to reject the original language of these resolutions. Democratic Majority for Israel said in a statement that the draft documents were "oversimplified and inaccurate".

"We are very pleased that, after careful deliberation, the party accepted our view. Sadly though, this is not the last time we'll see efforts to demonize and delegitimize Israel," said the group's president, Mark Mellman.

"The job of the Resolutions Committee is to represent the will of the broad tent that makes up the Democratic Party," Micah Liberman of the Progressive Zionists of California was quoted as saying. "They said to this small fringe that you may not abuse our system."

The Democratic Party has been rocked by high-profile accusations of anti-Semitism against some of its members. The allegations referred particularly to Muslim lawmaker Ilhan Omar, who suggested that Jewish organisations pay US politicians to support Israel.

These assertions ignited a wave of backlash from both sides of the aisle, with Rep. Omar falling under scrutiny from the Democratic Party and the House passing a bipartisan resolution to condemn all forms of bigotry including anti-Semitism.