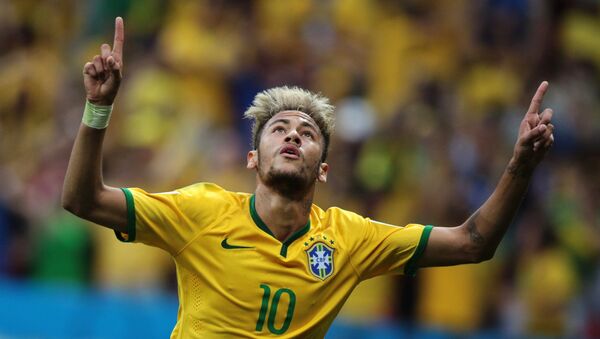 © Sputnik / Maria Plotnikova
/
Go to the photo bank
Subscribe
The accusations come a few weeks after Neymar was handed a three-match ban by the Disciplinary Committee of the French Football Federation for punching a fan during an altercation that took place on 27 April, minutes after his club PSG lost the French Cup final to Stade Rennais FC.

Brazilian football star Neymar has been accused of raping a woman in a Paris hotel in 2018, according to a document obtained by the Associated Press. Neymar strongly denies all the accusations.

The alleged incident reportedly took place on 15 May at an upmarket hotel, where the two met after exchanging Instagram messages.

The woman, whose name was not revealed, told police that after Neymar arrived at the hotel “apparently drunk”, they “touched each other” and that Neymar then became aggressive and violently had sexual intercourse with her against her will.

According to the document, the woman left Paris shortly thereafter, and claimed that she was in too much shock to lodge a complaint at the time.

The father of the Paris Saint-Germain (PSG) star also vehemently rejected the charges against his son.

“This is a tough moment. If we can’t show the truth quickly it will be a snowball. If we have to show Neymar’s WhatsApp messages and the conversations with this lady, we will,” Neymar dos Santos, who works as the footballer’s agent, said during a Brazilian television interview.

He claimed that his son was blackmailed with pictures and witnesses, adding that they “will push for justice to be served as quickly as possible”.

Twitter Storms as Neymar Filmed Putting Face Cream on During Match
The accusations follow Neymar being punished by Disciplinary Committee of the French Football Federation for punching a fan a few minutes after PSG lost the French Cup final to Stade Rennais FC on 27 April.

A video of the incident showed Neymar walking through the crowd along with his teammates to collect their 2nd place medals, when suddenly the footballer stops near a fan who was filming the players on a phone, and appears to punch him.

Reacting to a three-match ban for Neymar, a number of social media users argued that the 27-year-old’s punishment should have been more severe, considering the nature of his transgression.