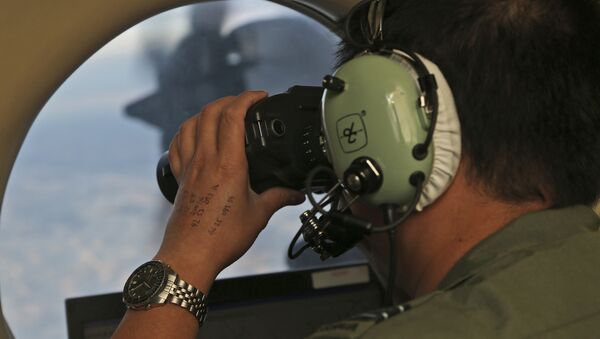 © AP Photo / Rob Griffith
Subscribe
Despite the fact that Malaysian Airlines flight MH370 disappeared five years ago, its fate remains a mystery prompting numerous sleuths to investigate various theories about what happened to the plane.

Alleged hijackers on the MH370 could have flown along so-called flight information regions (FIRs) to avoid detection by the Thai and Malaysian militaries, RAF navigator Steve Pierson told Jeff Wise, author of the book "The Plane That Wasn't There". According to Pierson, after disappearing from the secondary radar near a waypoint called IGARI, MH370 flew along the borders of the Kuala Lumpur and Bangkok FIRs.

This trick could’ve made the air traffic controllers in each of the FIRs think that the other one would handle the plane, the RAF navigator explained. Civilian controllers normally check with each other to avoid confusion in such situations, he added, but since the plane only showed up on military radars, it remained unnoticed by both sides.

The author of an investigative book about MH370, Jeff Wise noted that the alleged hijackers' plan had apparently worked and the plane's presence on military radars remained unnoticed until the records were brought up after the jet's disappearance. Pierson added that the individuals knew "exactly what they were doing" and alleged that they could have had a military background.

However, the official investigation, which lasted for several years after the plane's disappearance, has failed to reach any conclusion on the reason why MH370 changed its course and disappeared from radar screens in the region. The aircraft’s remains have still not been found, and multiple enthusiasts are pursuing different theories in a bid to locate where the plane crashed or landed, because some have suggested it was deliberately hijacked.

READ MORE: MH370 Hunter Claims Vanished Plane Had a Double to Frame US

Malaysian Airlines flight MH370 disappeared on 8 March 2014 while carrying 239 people from Kuala Lumpur to Beijing. It disappeared from civilian radars at 17:21 UTC, but was spotted on military radars until 18:22.

000000
Popular comments
This plane disappearance will stay a mystery forever. Plane parts found on remote beaches got media attentions but not more as that. Most funny was the media helping steering away from, and to the most unlikely places on this earth. Obvious ordered not to do a Assange. Never ever did, outside readers, anyone utter the name Diego. The place to be if looking for motif of pilots hunting for virgins.
atalanta
1 June 2019, 15:29 GMT
000000
So it comes back MI6 who else.
Aramis
1 June 2019, 16:33 GMT
000000
Newsfeed
0
New firstOld first
loader
LIVE
Заголовок открываемого материала
Access to the chat has been blocked for violating the rules . You will be able to participate again through:∞. If you do not agree with the blocking, please use the feedback form
The discussion is closed. You can participate in the discussion within 24 hours after the publication of the article.
To participate in the discussion
log in or register
loader
Chats
Заголовок открываемого материала
Worldwide
InternationalEnglishEnglishMundoEspañolSpanish
Europe
DeutschlandDeutschGermanFranceFrançaisFrenchΕλλάδαΕλληνικάGreekItaliaItalianoItalianČeská republikaČeštinaCzechPolskaPolskiPolishСрбиjаСрпскиSerbianLatvijaLatviešuLatvianLietuvaLietuviųLithuanianMoldovaMoldoveneascăMoldavianБеларусьБеларускiBelarusian
Transcaucasia
ԱրմենիաՀայերենArmenianАҧсныАҧсышәалаAbkhazХуссар ИрыстонИронауОssetianსაქართველოქართულიGeorgianAzərbaycanАzərbaycancaAzerbaijani
Middle East
Sputnik عربيArabicArabicTürkiyeTürkçeTurkishSputnik ایرانPersianPersianSputnik افغانستانDariDari
Central Asia
ҚазақстанҚазақ тіліKazakhКыргызстанКыргызчаKyrgyzOʻzbekistonЎзбекчаUzbekТоҷикистонТоҷикӣTajik
East & Southeast Asia
Việt NamTiếng ViệtVietnamese日本日本語Japanese中国中文Chinese
South America
BrasilPortuguêsPortuguese
NewsfeedBreaking
17:50 GMTOver 17.2 Million Cybersafety Threats Blocked in India, Report Says
17:25 GMTAfghan Soil Will Not Be Used Against China, Assures Taliban Leader After Meeting With Wang Yi
17:24 GMTPakistan Has Dominated India in 'Kinetic Conflict' Since Balakot Strikes, Minister Says
17:20 GMTSurvivors of Bhopal Gas Tragedy Launch Campaign as Millions Still Struggle for Compensation
17:14 GMTLeft-Wing Novara Media Rages After YouTube Briefly Suspends Its Channel
17:07 GMTUK Queen Elizabeth II Will Not Attend COP26 Opening Ceremony in Glasgow 'Following Advice to Rest'
16:57 GMTFacebook's Algorithm 'Fostered Rage' by Preferring Emoji Reactions to Likes, Internal Docs Show
16:37 GMTUS to Put Sputnik V, Other Vaccines on 'Green' Travel List After WHO Authorisation
16:35 GMTIran's Accession to Shanghai Bloc to Begin in Fall 2022, Russian Envoy Says
16:28 GMTUS Stocks Hit Record Highs Across the Board Tuesday Morning on Strong 3rd Quarter Earnings
16:26 GMTFrance to Close Mosque in Allons for 6 Months Over Jihad Propaganda - Interior Minister
16:22 GMTComedian Dave Chappelle Breaks Silence on Controversy Over His 'Transphobic' Special
16:06 GMTLeningrad Region Gov. Urges Council of Europe to Actively Engage Youth in Governance, Politics
16:03 GMTNot Quite the Friendly Skies: Georgia Businessman Files Lawsuit Over Epstein Plane
16:00 GMTGerman President Hands Merkel Notice About End of Her Term
15:41 GMTA Peek Inside the Red Box: What's in Rishi Sunak's Autumn Budget?
15:13 GMTBiden Can't Thwart Work of 6 January Committee, But It's in His Interests, US Media Claims
15:12 GMTIndia’s Top Probe Agency Reportedly Arrests Naval Officers in Kilo-Class Submarine Leak
15:04 GMTCanadian Prime Minister Trudeau Unveils New Cabinet
14:53 GMTSudanese Civil Aviation Authority Temporarily Suspends Flights to and From Khartoum