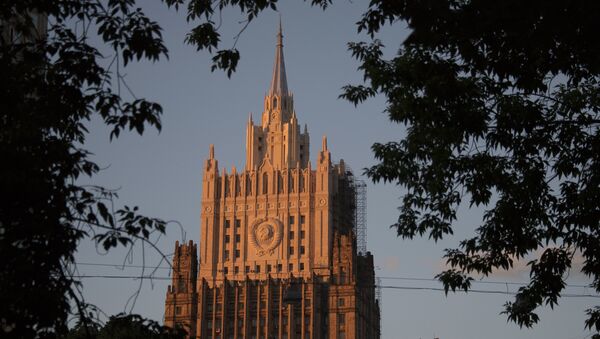 © Sputnik / Maksim Blinov
/
Go to the mediabank
Subscribe
International
India
Africa
The Russian Foreign Ministry stated that it has notified the EU delegation to Russia of the expansion of a list of the bloc’s representatives banned from entering Russia.

Russia will expand the list of representatives of EU member states and institutions that are banned from entering Russia, their number has been brought to parity with the EU list, the Russian Foreign Ministry said in a statement Friday.

As the Foreign Ministry stated, the European Union has recently adopted a number of unilateral restrictive measures against some Russian citizens. The ministry added that the grounds for such decisions were "unsubstantiated, and sometimes absurd accusations against our compatriots". As noted by the Russian Foreign Ministry, Moscow has repeatedly warned the EU against using any unilateral sanctions tool contrary to international law.

"In connection with the decisions made by the EU, we openly said Russia reserves the right to proportionate response measures. In connection with this, Russia has decided to expand the response list of representatives of EU member states and institutions that are banned from entering the territory of the Russian Federation. The number of people on the Russian list has been brought to parity with the EU list", the ministry said.

The ministry said it has notified the Delegation of the EU to Russia of the expansion.

EU Extends Anti-Russia Sanctions, Adds 8 More Individuals to List - Source
Since March 2014, the EU has been stepping up restrictive measures against Russia. The sanctions were adopted in retaliation for Crimea's reunification with Russia, which Brussels deems illegal.

The bloc also subjected 170 people and 44 entities to an asset freeze and a travel ban claiming that their actions affected Ukraine's territorial integrity, sovereignty, and independence.