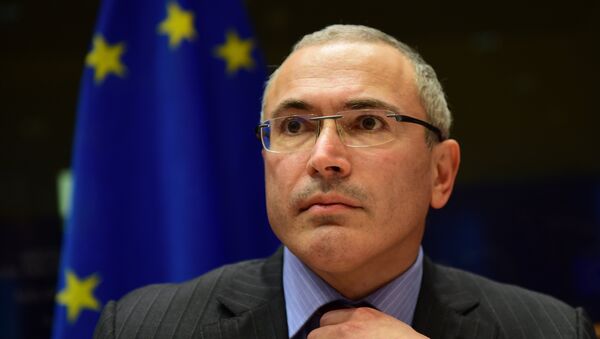 VLADIVOSTOK (Sputnik) - Former Yukos oil company head Mikhail Khodorkovsky and his partners have invested stolen billions of dollars in a new structure called Quadrum, which is now investing in real estate around the world, Salavat Karimov, an adviser to the Russian prosecutor general, said.

“[After $51 billion was transferred abroad], a new structure appears called Quadrum,” he told the authors of the documentary 'Mikhail Khodorkovsky’s Bloody Empire', released on the NTV channel on Friday.

According to journalists, through a chain of offshore trusts, Khodorkovsky, along with Leonid Nevzlin, Platon Lebedev, Vladimir Dubov and Mikhail Brudno, "retained control over the withdrawn funds, but also began to invest them in real estate around the world. Quadrum distributes this money into assets, creates companies, acquires real estate… And thus they [Yukos former co-owners] invest the stolen funds and legalise them in business," Karimov said.

The adviser to the prosecutor general of Russia went on to say said that Mikhail Khodorkovsky gained control over then state-owned Yukos energy company in mid 1990s after transferring $250 million to the company's leadership, Salavat Karimov.

"Khodorkovsky guaranteed them the payment of a 15-percent stake of Yukos, which then had a market price of 2$ billion. And he really transferred… several hundred millions to the offshore accounts that were opened by these four Yukos top managers," Karimov told the authors of a documentary aired on Friday by the NTV broadcaster.

The authors of the investigation said citing the prosecutors that after getting the money the Yukos leadership lobbied an idea in the government to "concentrate Yukos shares in the hands of an effective investor."

According to the investigators, at that time, Muravlenko had already agreed with the oligarchs that Mikhail Khodorkovsky should become the only investor.

The documentary dubbed "The Bloody Empire of Mikhail Khodorkovsky" revealed that the Prosecutor General's Office of Russia had launched a new large-scale investigation into the former owners of Yukos several years ago.

The documentary added citing the investigators that "at the start of his business, Khodorkovsky, along with his accomplices, had taken control of the oil company as a result of a carefully planned scheme."

Close Look: Yukos Shareholders vs. Russia at European Court of Human Rights
Khodorkovsky, the former owner of the now-defunct Yukos oil company, was placed on the wanted list in Russia after a Russian court charged him with organising the 1998 murder of Nefteyugansk town mayor.

A former chief of security at Yukos was convicted of planning Mayor Vladimir Petukhov's murder.