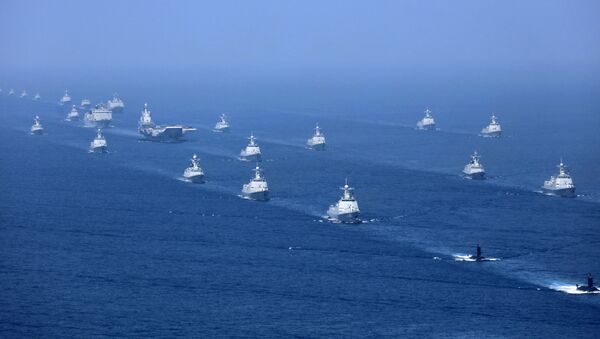 © AP Photo / Li Gang/Xinhua
Subscribe
Six states claim ownership over several parts of the South China Sea, but at the moment China controls the vast majority of the territory. The US is actively trying to contest Beijing's dominance in the region by sending military ships, sparking concerns that such moves could cause a conflict.

Philippine President Rodrigo Duterte has called on China to actively participate in the development of a code of conduct for operations in the disputed waters of the South China Sea warning that "the longer it takes" the greater the chances that the region will become a "flashpoint of troubles". Duterte further noted that the US, UK, and France are already "testing the waters", threatening the fragile balance.

The Philippine president also reiterated his earlier statements that he and his country are not in power to affect China's behaviour at sea, but at the same time added that he is "sad and bewildered" by Beijing's actions. He also questioned the rightfulness of the Asian country's claims to the territory, disputed by five other states.

“I love China... but it behoves upon us to ask, 'is it right for a country to claim the whole ocean?’” Duterte said.

Duterte is often criticised in his country over allegedly backtracking after pressure from China following a major victory at the international maritime tribunal, which ruled Beijing's claims to islands that the Philippines dispute as ungrounded. However, in April the Philippine president warned China against hostile actions against its island Pag-asa, vowing to send the military on "suicide missions" to defend it.

Recently, acting US Defence Secretary Patrick Shanahan slammed China's military constructions on the islands in the sea, including runways and surface to air missiles as "excessive" and "overkill". Beijing insists that all the installations in the South China Sea are purely defensive.

Shanahan met with his Chinese colleague on 31 May to discuss pending bilateral issues in military sphere at an Asia security summit in Singapore. A Pentagon spokesman has called the talks "constructive and productive", adding that the two discussed ways to prevent a "misunderstanding and miscalculation between nations".

The two country's relations have been strained by tensions around the sea's status. Washington regularly sends its military vessels to the region to conduct Freedom of Navigation missions. Beijing considers such moves "provocations" and has called on Washington to stop the practice.

Apart from China and the Philippines, Malaysia, Brunei, Taiwan and Vietnam claim rights to various swathes of territory in the South China Sea. The majority of the territory is still controlled by Beijing.