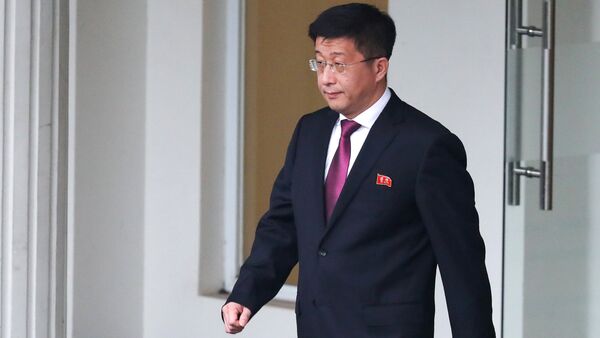 © REUTERS / Athit Perawongmetha
Subscribe
North Korean leader Kim Jong-un and his government are said to have carried out a purge against at least five Foreign Ministry officials, including the country’s envoy to the US, following the second official meeting between leaders of the US and Democratic People's Republic of Korea.

Kim Hyok-chol, North Korea's special envoy to the US who acted as US Secretary of State Mike Pompeo's counterpart in discussions prior to the failed Hanoi summit between the two nations, has been dead for months, reported South Korean newspaper The Chosun Ilbo Friday.

"Kim Hyok-chol was investigated and executed at Mirim Airport with four foreign ministry officials in March", an anonymous North Korean source revealed, according to The Chosun Ilbo.

The unnamed source added that Kim Yong-chol, vice chairman of the Central Committee of the Workers' Party of Korea for South Korean affairs, was ordered into "forced labour" in Jagang Province.

The Chosun Ilbo goes on to assert Kim Jong-un's interpreter at the Hanoi summit, Shin Hye-yong, also found herself reprimanded and eventually detained in a "political prison camp" for reportedly undermining the DPRK leader through a mistranslation.

The source believes Kim Jong-un and his government are carrying out this "purge" to shift attention away from "domestic dissatisfaction". An "ideological education" programme is also mentioned as a requirement for those punished.

Reuters noted that in a Thursday release, Rodong Sinmun, North Korea's official newspaper of the ruling party, included commentary saying "acting like one is revering the Leader in front (of others) but dreaming of something else when one turns around, is an anti-Party, anti-revolutionary act that has thrown away the moral fidelity toward the Leader, and such people will not avoid the stern judgment of the revolution".

In response to the reported executions, CEO of Korea Risk Group Chad O'Carroll took to Twitter, claiming he had communicated with a source earlier this week who contradicted The Chosun Ilbo's report.

Source told me this week that Kim Hyok Chol had been seen at the foreign ministry recently in Pyongyang… https://t.co/ADY7JiehY4

The Chosun Ilbo concluded its report by highlighting that this is the first time the words "stern judgment" and "anti-Party, anti-revolutionary" have been used by the North Korean publication since the execution of Kim Jong-un's uncle-in-law Jang Song-thaek in December 2013.

000000
Popular comments
If Kim Hyok Chol is indeed executed, then the investigation must have unearthed that he had accepted millions from the rogue US of Na as bribes to betray North Korea.

PranSa
31 May 2019, 05:29 GMT3
000000
doubt we will ever know the truth behind this story, and this is the frustration you get an article like this which paints a narrative but you can't go anywhere to fact check it, as it only appears on western media outlets
brwnxpng
31 May 2019, 05:51 GMT6
000000
Newsfeed
0
New firstOld first
loader
LIVE
Заголовок открываемого материала
Access to the chat has been blocked for violating the rules . You will be able to participate again through:∞. If you do not agree with the blocking, please use the feedback form
The discussion is closed. You can participate in the discussion within 24 hours after the publication of the article.
To participate in the discussion
log in or register
loader
Chats
Заголовок открываемого материала
Worldwide
InternationalEnglishEnglishMundoEspañolSpanish
Europe
DeutschlandDeutschGermanFranceFrançaisFrenchΕλλάδαΕλληνικάGreekItaliaItalianoItalianČeská republikaČeštinaCzechPolskaPolskiPolishСрбиjаСрпскиSerbianLatvijaLatviešuLatvianLietuvaLietuviųLithuanianMoldovaMoldoveneascăMoldavianБеларусьБеларускiBelarusian
Transcaucasia
ԱրմենիաՀայերենArmenianАҧсныАҧсышәалаAbkhazХуссар ИрыстонИронауОssetianსაქართველოქართულიGeorgianAzərbaycanАzərbaycancaAzerbaijani
Middle East
Sputnik عربيArabicArabicTürkiyeTürkçeTurkishSputnik ایرانPersianPersianSputnik افغانستانDariDari
Central Asia
ҚазақстанҚазақ тіліKazakhКыргызстанКыргызчаKyrgyzOʻzbekistonЎзбекчаUzbekТоҷикистонТоҷикӣTajik
East & Southeast Asia
Việt NamTiếng ViệtVietnamese日本日本語Japanese中国中文Chinese
South America
BrasilPortuguêsPortuguese
NewsfeedBreaking
19:12 GMT'Political Hot Potato'? Media Ponders on Cancellation of UK Queen’s Visit to Northern Ireland
19:07 GMTMan Kills His Elderly Grandfather With Axe After 'God Told Him to Do it,' Media Says
19:03 GMTFrench Presidential Hopeful Slammed for Waving Gun at Journalists
19:01 GMT‘No Business Being There’: Meghan McCain Revisits Rage at Ivanka, Jared for Attending Dad’s Funeral
18:48 GMTAfghan-Pakistan Border 'Equally Unstable' as LOC, Will 'Come & Bite Them', Warns Indian Army Chief
18:46 GMTTrump's New Social Media Platform 'TRUTH' Hacked By Pranksters
18:39 GMTRape Case Involving Afghan Man Prompts Leaders to Call for Halt to Resettlement in Montana
18:38 GMTExplosion at Power Plant Causes Major Blackout in Afghan Capital
18:35 GMTIs Zuck Stuck? Facebook Facing New Challenges & Rebranding Unlikely to Save the Day, Observers Say
17:55 GMTGerman Defence Chief Warns Europe Against ‘Detaching From America’ & NATO in Wake of Afghan Debacle
16:52 GMTEMA Says Sputnik V Still Under Review, Gives No Comments on Assessment Timeline
16:41 GMTPutin Calls NATO Military Presence in Ukraine a Real Threat to Russia
16:25 GMTBiden Was Right to Withdraw US Troops From Afghanistan, Putin Says
15:52 GMTUK’s Johnson Calls for 'Fast' Solution to Issues With N. Ireland’s Post-Brexit Protocol
15:40 GMTPutin Calls COVID-19 Pandemic Another Reminder of How Fragile Global Community Is
15:37 GMTPentagon: US Army, Navy Hold 3 Successful Tests in Bid to Advance Hypersonic Weapons' Development
15:33 GMTScottish Power Boss Slams 'Regressive' Price Cap, Warns of Energy Supplier 'Massacre' in UK
15:33 GMTEpstein's Ranch Had Computer Rooms 'The Size of Houses' to Spy on Guests, Claims Alleged Victim
15:32 GMTWHO Studying Sweden's, Denmark's Data on Side Effects of Moderna Vaccine
15:25 GMTPutin: Battle for Equal Rights in West Turning Into Dogmatism Bordering on the Absurd