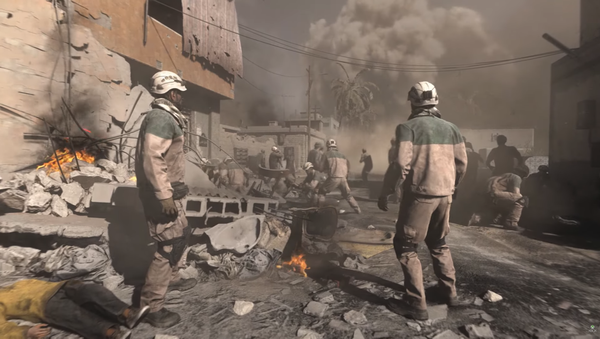 © YouTube screenshot
Subscribe
International
India
Africa
Infinity Ward’s upcoming installment in the “Call of Duty” first-person shooter video game series has some new features for players, including taking up arms alongside The White Helmets, al-Qaeda affiliates known to be responsible for faking chemical attacks in Syria. Who are you fighting? Well, the Russians, of course.

In a new trailer for "Call of Duty: Modern Warfare" released Thursday, players are treated to a stunningly detailed world in which designers note they will explore the "morally gray" side of war, particularly as associated with modern proxy wars. Although the game is set in the fictional Middle Eastern country of Urzikstan, game writer Taylor Kurosaki told the Los Angeles Times the game's inspiration is the Kurdish YPG's fight against Daesh* in the Syrian Civil War.

"There's this whole other side of war today that is real, that's happening, and to ignore it or not cover it felt like it would be a terrible, terrible omission," Kurosaki told the Times. "It wouldn't be doing justice to the unintended victims in these wars and the unsung heroes of these wars."

Those unsung heroes apparently also include the White Helmets: supposed disaster aid workers who go behind enemy lines in the Syrian conflict to impartially help civilians in need of assistance.

The White Helmets appear in two scenes in the trailer. In one, they are among a crowd in a town square littered with rubble who come under attack from what is presumed to be a Russian aircraft (a Russian Su-25 Frogfoot ground attack jet is seen strafing a town a moment earlier). In another, the White Helmets are seen among smoke and smoldering rubble, carefully lowering a victim on a stretcher.

This is the image presented to the West by carefully crafted propaganda reels like "The White Helmets," a 2016 documentary that won an Academy Award for best documentary. Ars Technica's Sam Machkovech, who attended a preview of the game at Infinity Ward's Los Angeles headquarters, noted the designers "name-checked" the documentary along with "Last Men In Aleppo," a 2017 documentary also about the White Helmets. 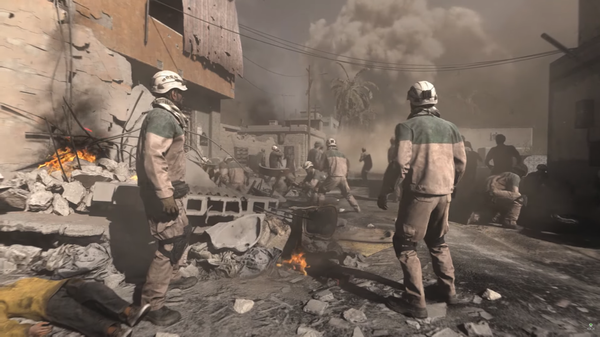 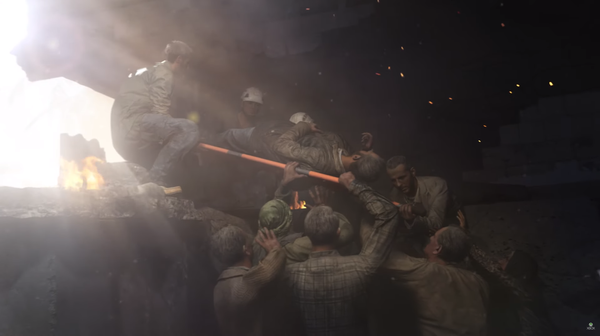 However, there is another side to the White Helmets that is kept out of the Western press: one that helps al-Qaeda's franchise in Syria, al-Nusra Front (today Hay'at Tahrir al-Sham) carry out its grisly executions in "liberated" territories, and which cooks up fake evidence of chemical attacks by the forces of Syrian President Bashar al-Assad.

Journalists Max Blumenthal and Ben Norton reported in AlterNet in 2017 on videos showing the White Helmets helping dispose of freshly executed prisoners of al-Nusra in the Syrian city of Jasim, in South Daraa Province, and another in Haritan, northwest of Aleppo, in 2015.

"A jarring execution filmed in 2015 in the rebel-held town of Haritan shows two members of Syria Civil Defense waiting just off camera while a member of Syria's al-Qaeda affiliate, Jabhat al-Nusra, reads out a death sentence, before shooting a man dressed in street clothes in the head. Seconds later, the White Helmets team tosses the man's body onto a stretcher and scrambles away," the journalists wrote.

Further, dozens of White Helmets members recently admitted to having staged fake chemical weapons attacks in rebel-held areas, describing in detail the ways they superficially reproduced the various symptoms of chemical attack, such as foaming at the mouth and playing dead, Sputnik reported.

"We have interviewed… 40 members of the White Helmets, including those from Douma, who provided a detailed description of their methods commonly used by their organization to fake scenes," Foundation for the Study of Democracy Director Maxim Grigoriev said.

He added that the foundation conducted a fact-finding mission in Syria and located both White Helmets members and dozens of other people who participated in the staged attacks.

"Those people told us in detail how they had to participate in the staging for few dollars to buy some food for their families."

The White Helmets have received tens of millions of dollars in support from US State Department agencies like the US Agency for International Development (USAID), as well as other Western government bodies like the British Foreign Office. Since 2015, the US government has regarded use of chemical weapons by the Syrian government as a "red line" that would trigger a response from Western powers, and twice the Trump administration has launched cruise missile attacks on Syrian territory in response to supposed chemical weapons attacks.

Kurosaki said he wanted to tell "Call of Duty" fans about a "side of warfare that they may not be aware of," but it seems to be just as much a State Department version of modern conflicts as it ever was.

The game is expected to be released October 25 on Xbox One, PlayStation 4 and PC.