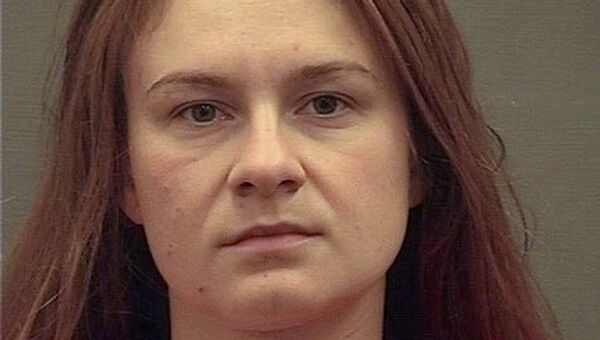 © REUTERS / Alexandria Sheriff's Office
Subscribe
International
India
Africa
WASHINGTON (Sputnik) - Russian citizen Maria Butina, sentenced to 18 months in prison on charges of conspiring to act as a foreign agent in the United States, will spend the rest of her sentence in the prison in Tallahassee, Florida, her lawyer Robert Driscoll told Sputnik on Thursday.

"This is the prison where she will spend her remaining time", Driscoll said.

On Wednesday, US authorities transferred Butina to the federal correctional institution in Tallahassee. Butina is expected to be released on 5 November, according to the Federal Bureau of Prisons.

World
Moscow Rules Out Exchange of US Citizen Whelan for Russia's Butina - Ryabkov
On 26 April, Maria Butina, 30, was sentenced to 18 months in prison after pleading guilty to a single count of conspiring to act as an unregistered foreign agent. She was arrested on 15 July 2018, and was held in solitary confinement for 67 days, which exceeded the limit recommended by the Nelson Mandela Rules for the treatment of prisoners.

Moscow has called Butina's sentence a disgrace to the US judicial system. Russian President Vladimir Putin said her indictment was unjustified because the Russian government had not charged her with any mission.