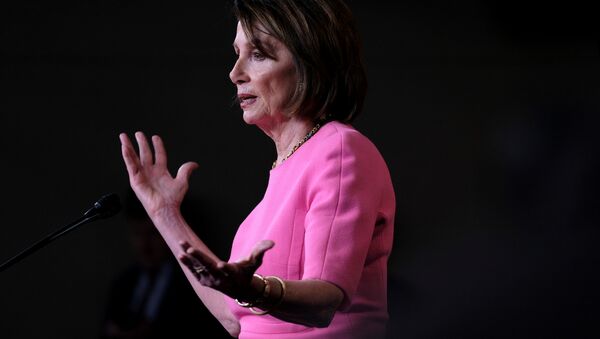 House Speaker Nancy Pelosi knocked Facebook on Wednesday, noting that the social media company’s refusal to pull altered videos of her allegedly being intoxicated busts their earlier claims that they were unwitting victims of alleged Russian exploitation during Trump’s presidential campaign.

Although it seems to be common practice to alter videos and photos with the most prominent politicans on social media, just for fun, with most paying little, if any, attention to that, it seems not to be the case with US House Speaker Nancy Pelosi.

"We have said all along, poor Facebook, they were unwittingly exploited by the Russians. I think wittingly, because right now they are putting up something that they know is false. I think it's wrong", Pelosi said, kicking off her comments, proceeding: "I can take it… But [Facebook is] lying to the public".

The top Democrat then expressed a view that they have thereby proven by not removing something they “know is false” that they “were willing enablers of the Russian interference in our election”.

The comments came as Pelosi was speaking to KQED News less than two hours after Special Counsel Robert Mueller made his first public comments on his two-year investigation into accusations against Donald Trump and his 2016 election campaign.

Ex-Secretary of State Hillary Clinton also weighed in on the criticism over the Pelosi video, calling it “sexist trash”.

Both Democrats’ backlash was chewed over on Twitter, with one cheekily remarking that Clinton’s fiery remark looks like an upbeat graduation speech:

Sounds like an upbeat graduation speech. Conquer the world kids.

“She is such a fascist,” another netizen remarked, while many seemed to be more focused on Facebook and its approach to the content:

@facebook needs to be split up or shut down. They are incapable or uninterested in instituting ethical, lawful protocols or eradicating hateful propaganda. #FacebookIsANationalSecurityThreat

She has a point — even today FB will host any crazy content from any anonymous source for $$. The whole, “we’ll be transparent” line was just that, a line.

Referring to Pelosi, one user suggested that she is a “tyrant” due to her earlier demands that Facebook take down the video; whereas a different one noted that she is funny, because otherwise, pro-Democrat media would also have to do something about “funny Trump videos” in return:

TYRANT PELOSI Tells Facebook to Take Down Unflattering Video of Her Stuttering and Slurring Her Words (VIDEO) https://t.co/IOAdO1dbd7 via @gatewaypundit

This Pelosi thing is very funny. She is mad about the video, CNN has push the agenda hard. Think about it if they removed it they would have to do the same to all those funny Trump videos.

Many appeared to give the whole thing a decent laugh:

They should show this video, it's the real one.🤣https://t.co/RoWvnoN6XV

Some even attempted to come up with Pelosi-inspired memes and similar clips to support the “no less funny drunk video”, with Democrat Alexandria Ocasio-Cortez being one of the central characters:

She is quickly becoming irrelevant in the cacophony that has become our American democracy. The radical wing of her party is pushing her kind out. pic.twitter.com/smfwG8EEcA

Last week, a heavily altered video of Pelosi with a manipulated voice pitch and speed to make her look and sound inebriated made rounds on social media, with critics using the clip to attack the congresswoman’s mental stability.

Although the social media giant admitted that the clip could have been deliberately altered, it announced a decision to keep the acoustically modified video on the platform in a bid to find and sustain “the right balance between encouraging free expression and promoting a safe and authentic community”.