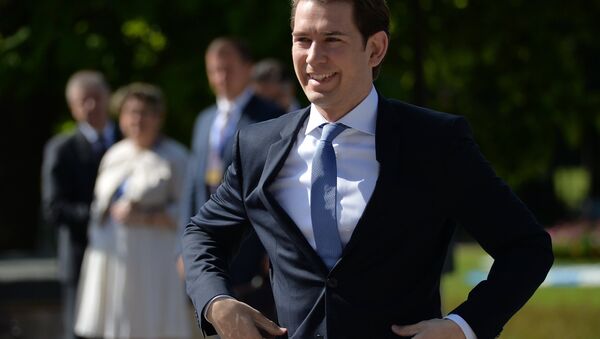 Sebastian Kurz could make a comeback in Austria's September snap vote after being removed as chancellor on 28 May, said Bill Ravotti, moderator of the V4 Report, and EU expert Klaus Jurgens, commenting on the balance of power in the country following the scandalous Ibiza video release.

Austrian Chancellor Sebastian Kurz has been removed from office with the right-wing Freedom Party (FPO), his former ally, and the opposition Social Democrats (SPO) backing a no-confidence vote.

The move followed a scandal involving former Vice Chancellor and FPO leader Heinz-Christian Strache who was caught on camera discussing a controversial "deal" with an alleged "wealthy Russian woman" in Ibiza in 2017. Later, Strache said the woman was actually a Russian-speaking Latvian citizen, while Austrian Kronen Zeitung reported, citing unnamed sources, that she was actually a Bosnian student, with no confirmation following.

The question then arises whether Kurz's ouster was really justified.

"It was absolutely necessary based on Sebastian Kurz's rise to power and the platform that got him there. Kurz had valid reasons to replace Strache, but we question his judgement to break entirely from the FPO. It was Kurz who 'borrowed' the FPO's platform on migration to help get him elected", argues political analyst Bill Ravotti, the moderator of the V4 Report.

For his part, UK-based political analyst and EU expert Klaus Jurgens opined that it was not smart on the part of socialists and conservatives to vote against Kurz: "It was a historic high at the European Parliament elections and the people seem to like Sebastian Kurz and the party".

"Today he issued a poster in the sense, along the lines of 'Parliament has nothing to say, soon the people will speak' referring to the September elections", Jurgens noted expressing doubts regarding the viability of a FPO-SPO alliance.

"If the source of the Strache video is revealed, this would likely cause the next scandal", Ravotti suggested. "Somebody wanted to frame the FPO and it would be interesting to see who it was and the motive behind this sophisticated sting. Obviously, the source has its own motives for remaining anonymous".

Kurz Might Head Austrian Gov’t Again After Election as Faces No Major Competitor
Jurgens went even further by suggesting that "if someone really wants to destroy the Freedom Party"; they must have filmed or taped other OFP politicians, because Strache now has nearly zero chances of winning in the upcoming vote.

Commenting on the potential source of the Ibiza video the experts hypothesised that it could be an "outside job".

Jurgens opined that it was "an attack from outside of Austria, in particular, Germany", citing the fact that "two German media houses basically put all of it online initially".

For his part Ravotti specified that the leak "was well planned" and conducted "probably [by] a combination of pro-Berlin forces aligned with the liberal old guard in Austria".

The video in question was released by Der Spiegel and the newspaper Süddeutsche Zeitung on 17 May, just several days before the European elections, and triggered Strache's resignation the very next day.

Sebastian Kurz's OVP May be 'Clear Winner' in September

Given the results of the European Parliament elections, it appears that the Austrian People's Party, headed by Chancellor Sebastian Kurz, will do well again in September. Still, according to Ravotti, it is not a done deal.

"Kurz will win the snap election but it may prove difficult to win an outright majority", the V4 Report moderator believes. "The question remains as to who his next partners will be in government or what his next platform will entail". Ravotti noted that earlier Kurz had largely relied on the FPO.

Mistrust or Power Poker? Historic Defeat for Chancellor Sebastian Kurz
According to Jurgens' prognosis, Kurz's OVP may "come out as a clear winner" in September: "I would not say 40 or 50 percent, not a single-party government, but definitely as a winner. It is a highly likely scenario", he said.

The UK-based political analyst presumed that the OVP may benefit "from the infighting which now starts in the Social Democratic Party over who will be the front-runner, in the FPO over what Norbert Hofer can achieve, let alone the smaller parties".

Weighing the pros and cons of Kurz's return, Jurgens highlighted that the Austrian politician is a promising figure given his party's impressive results in the European elections. He added at the same time that Kurz had "ruined his own government twice in less than 500 days" and "broke up with the Socialists and now he broke up with the FPO".

However, the political analysts hold opposite views on whether Kurz can manage to restore relations with the FPO if he comes out on top in September.

Video Scandal in Austria Caused Great Damage to Political Culture - German FM
While Jurgens believes that "it would not be impossible that they make an offer", Ravotti insisted that "this will be difficult as the FPO and its supporters feel betrayed and used [by the chancellor]".

The V4 Report's moderator recalled that Kurz had demanded the dismissal of Interior Minister Herbert Kickl, a FPO member, "who was doing an outstanding job of trying to correct the mistakes of past governments (OVP and Socialists) by designing measures to discourage the migrants from staying".

"The reputation of Kurz as an opportunist with unbridled ambitions is growing", Ravotti said. "We are not sure the FPO will trust Kurz in the future".