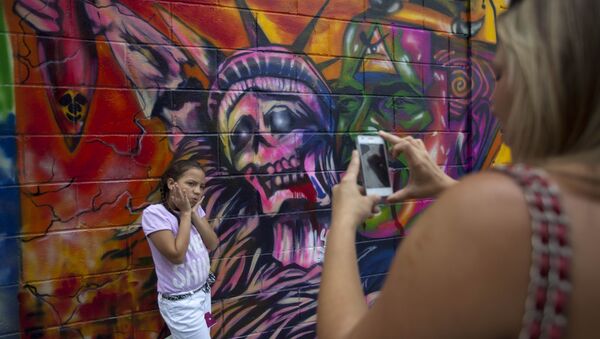 © AP Photo / Ariana Cubillos
Subscribe
International
India
Africa
Talks between figures from the Venezuelan government and the opposition in rebellion concluded in Norway on Thursday without breaking the impasse. While both sides remain intransigent, the reality is that the opposition has many other potential leaders than neophyte Juan Guaido - many of whom might not support his armed uprising.

The second round of talks in Oslo ended without a deal, but Venezuelan President Nicolas Maduro said he still believes they were constructive.

"I want a peace agreement for Venezuela. I ask for support from the country, Chavism and the motherland… Our path is a dialogue, respect for the constitution, peace, democracy, development and problem-solving," Maduro said Thursday, Sputnik reported.

Since January 23, Guaido has claimed to be the country's interim president, denouncing Maduro's re-election to a second presidential term in May 2018 as democratically illegitimate. The US and about 50 other nations have backed Guaido's claims, while the United Nations, the International Monetary Fund and the remaining three-quarters of the globe's countries continue to do business with Maduro, who remains in charge in Caracas.

Three coup attempts have all fizzled within days of being announced, and Guaido is no closer to power than he was in January. He may be worse off than ever, one journalist told Sputnik from Caracas.

However, the US isn't backing off on its drive for regime change, having recently arrested anti-war protesters protecting the Venezuelan Embassy in Washington, DC, and delivering the building to Guaido's supposed ambassador to Washington, Carlos Vecchio.

Dan Kovalik, author of the new book "The Plot to Overthrow Venezuela: How the US Is Orchestrating a Coup for Oil," told Radio Sputnik's By Any Means Necessary Thursday it's "not surprising" the latest round of negotiations has broken down, as neither side feels it can — or should — back off its original position.

​"The other thing that I think is important to keep in mind, because while the mainstream press… want Maduro to stand for early elections, I think it's fair to say that such elections could not be free and fair at the moment, given that they would be held with a gun to the heads of the Venezuelan people," Kovalik said. "You know, the US is imposing these draconian sanctions against the country, is threatening them with military intervention, all to support this Juan Guiado. Well, how does that set the stage for free and fair elections? It really doesn't."

"So I think it's fair for Maduro, frankly, to hold his ground," Kovalik told hosts Eugene Puryear and Sean Blackmon, "and we'll see if doing so will still allow for negotiations to proceed."

"First of all, Henri Falcon, who ran against Maduro last year, recently said in the last week that the opposition's move to abstain from that election last year has proved to be devastating for them. You know, Falcon lost that election in part because there was such a big abstention by the opposition. So that's why they have found themselves in the position that they're at," Kovalik said, noting that Falcon represented a more moderate faction of the opposition than Guaido or Leopoldo Lopez.

However, "Guaido was not a significant leader of any opposition force," Kovalik said, noting that when Guaido declared himself president on January 23, 80% of Venezuelans had never heard of the man.

"Moreover, when he made the announcement, he did so with other opposition leaders, by whose side he didn't even tell them before his announcement that he was going to claim he was president — and they looked shocked when he did."

"The point being, there's other people who claim to be the leaders of the opposition," the author said. In a prospective early election, Guaido may find himself to have "little to no support at all."

Guaido has shown his hand, Kovalik said: Vecchio sent a letter to US Admiral Craig S. Faller, the commander of US Southern Command (SOUTHCOM) on May 11 requesting "strategic and operational planning" with them to "restore our democracy."

​"That is his only way to become president of Venezuela," Kovalik said, noting all three of Guaido's attempted uprisings have failed.

"The whole goal" of US sanctions on Venezuela is "to make the Venezuelan people suffer in order to coerce them into rising up against their own government." Kovalik said. "This is the definition of terrorism."

"There is a very strong class element to the respective support of people in Venezuela for the two sides," Kovalik said. He noted that 80% of Venezuelans oppose the US-directed economic sanctions against the country and a similar majority oppose US military intervention as well. "The poor and working class tend to support Maduro — in fact, the poor and working class continue to be benefited by the Maduro government, even despite the sanctions."

Earlier this week, the United Nations Habitat Assembly in Nairobi, Kenya, recognized the achievements of Venezuela's Great Housing Project, which has provided 2.6 million "dignified homes" to Venezuelan families since 2011, saying it was one of the top countries in the world for guaranteeing people's right to housing, according to Venezuela's Minister for Habitat and Housing, Ildemaro Villarroel.

​"It's the wealthy who tend to want to oust Maduro because they feel that the country has been handed over to the poor and working class people and that is what they resent."

"And not just to the poor and working class, there's also a racial component to this," Kovalik said. "The wealthy, who also tend to be lighter-skinned people, also believe that the country has been handed over to people of color because people of color — Afro-Venezuelans, indigenous people — have benefited greatly from the Bolivarian Revolution, and they tend, therefore, to support the Maduro government. And this is what really irks the ruling class in Venezuela. They feel resentful that people with brown skin are now having the voice in the country."

"There's a certain irony in that the liberal establishment in the US, which tends to be interested in diversity politics, are not siding with people who they are inclined to support in Venezuela, and that is the poor and working class people," Kovalik told Sputnik.

Instead, the "liberal establishment, in fact, is pushing for intervention in Venezuela," Kovalik said, noting how US President Donald Trump was egged on and "attacked from the right" by Democrats and the liberal media for second-guessing his strategy in Venezuela following a meeting with Russian President Vladimir Putin, who backs Maduro.