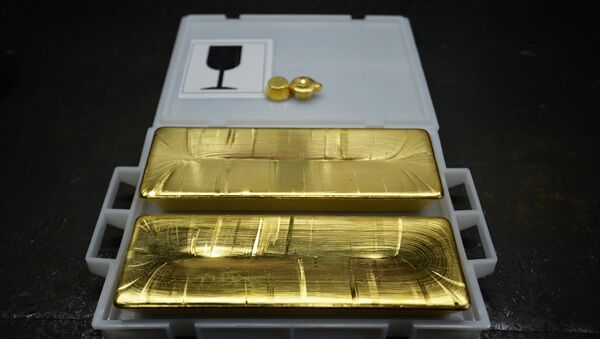 Fresh statistics from the World Gold Council real that Russia became the largest buyer of gold in the first quarter of 2019, purchasing 55.3 tonnes, while China ranked second, securing 33 tonnes of the precious metal. Russia and China, however, are not alone in their decision to boost their gold reserves.

In a major turn of events, Serbia and the Philippines have decided to join the global bullion-buying spree amid similar efforts by world central banks.

According to Vecernje Novosti, Serbia will increase its gold reserves from 20 to 30 tonnes by the end of 2019, and then up to 50 tonnes over the next year as a safety measure.

The decision was reportedly made following the meeting of the country's president, Aleksandar Vucic, with an IMF delegation, where the fund's representatives told him that they'd approve of Belgrade's gold-buying if it fit into Serbia's strategy of beefing up foreign exchange reserves.

As for the Philippines, the Bangko Sentral ng Pilipinas has announced that a law has been passed exempting gold sales by small-scale miners to the central bank from excise and income taxes to boost the country's foreign exchange reserves and prevent smuggling.

According to Reuters, small miners have found a way to bypass taxes introduced back in 2011 by selling gold on the black market, while by law, they are supposed to sell all produced gold to the country's central bank at world market prices. The Philippines' gold reserves remained unchanged at roughly 198 tonnes in both the first quarter of 2019 and the fourth quarter of 2018.

Ronald-Peter Stoeferle, a fund manager at Incrementum AG and one of the authors of the 13th annual In Gold We Trust report, believes that both countries' move towards gold stockpiling is not unexpected.

Earlier this month, the World Gold Council reported that net purchase of gold by the Russian Central Bank was the highest in the first quarter of 2019. It bought 55.3 tonnes and brought the country's gold reserves to 2,168.3 tonnes, while dramatically reducing its US Treasury holdings as part of its de-dollarisation plans. China is also among the largest buyers, having acquired 33 tonnes of gold in the first quarter of this year.

"From my point of view, it is a bigger de-dollarisation trend that is going on. It seems that many countries all over the globe are de-dollarising; they are basically diversifying from the US dollar. It is not only Russia, it is also Kazakhstan; it is China, of course; recently it was Hungary and also Poland, so also countries from the European Union. This shows lack of trust in the US dollar. We’re also seeing this trend to repatriation; many countries are trying to get back their gold holdings that are stored internationally. This is also a big sign of the loss of confidence and trust in counter-parties and in the global financial system", Stoeferle says.

Overall, net buying by central banks across the globe reached its highest level, in terms of first quarter net purchases, since 2013, having surged by 68 percent year-on-year to 145.5 tonnes, according to the data.

According to Dr. Martin Murenbeeld, president of Murenbeeld & Co., who is known internationally for his gold price analysis and forecasts, gold will become an "increasingly attractive" reserve asset for many central banks around the world due to a number of factors:

"Given the global concern with the direction of US policy and the dollar as the principle global reserve asset, it is understandable that where possible central banks will increasingly diversify their reserves away from the dollar. But with the possible fragmentation of the EU, which makes the euro a potentially suspect reserve currency, and China’s inability/unwillingness to develop transparent financial markets, which renders the renminbi a useless global reserve currency, gold will by default become an increasingly attractive reserve asset to many central banks. Gold is not a liability of the ECB, the Fed, or the Peoples Bank of China".