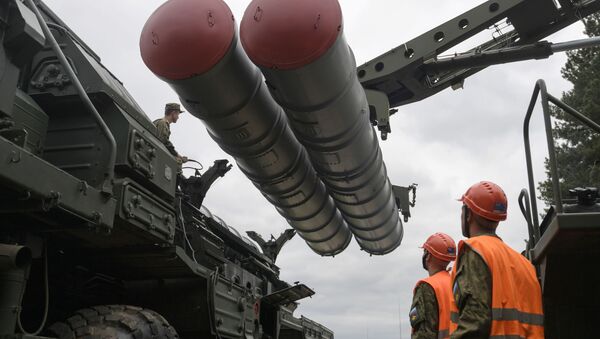 © Sputnik / Grigoriy Sisoev
Subscribe
International
India
Africa
Tensions between Turkey and the United States have reached a fever pitch in recent months over Ankara's decision to go ahead with the purchase of Russia-built air defence systems, which Washington claims will jeopardise its NATO ally's role in the F-35 fighter jet programme and could prompt sanctions.

Ankara has not received an ultimatum from Washington over the S-400 deal, Turkish Defense Minister Hulusi Akar said in an interview with the Turkish channel Haberturk.

Akar's comments come amid reports that the United States has put forward an ultimatum to Turkey, threatening to kick Ankara out of the F-35 fighter jet programme if the Turkish government does not abandon the Russian missile defence systems.

The minister stressed that he would not comment on the "assumptions" when asked how Turkey would act if the United States imposed sanctions on Ankara.

"We are acting in full compliance with the commitments we have undertaken," Akar added, while emphasising that Turkey has fully paid for the delivery of F-35 fighters from the US, and Turkish pilots are already training on the new jets.

Meanwhile, Reuters cited two unnamed sources with knowledge of the situation as claiming that Washington is considering suspending training for Turkish pilots as the two countries have been at loggerheads for months.

'Very Negative' Consequences For Turkey If S-400 Deal Takes Place - State Dept
The Pentagon and State Department have yet to comment on the claims. Turkish pilots are currently training at Like Air Force Base in Arizona, even though the Pentagon has already halted deliveries of F-35 equipment to Turkey.

Last week, US State Department spokesperson Morgan Ortagus said in a statement that Turkey's acquisition of Russia's S-400 would have "very real and very negative consequences".

The United States has, on a multitude of occasions, claimed that the S-400s are incompatible with NATO military equipment and alleged that the Russian air defence systems pose a threat to the F-35s.

Ankara, in turn, has insisted that the purchase of those weapons is its sovereign affair and has excluded the possibility of abandoning plans to complete the purchase.

US $25Mn Investment in Greek Military a Message to Turkey Amid S-400 Row - Prof
The Turkish side has also stressed that the S-400s were not connected to the security of the alliance, the US or the F-35 in any way, and the decision to acquire them “does not target a third country”.