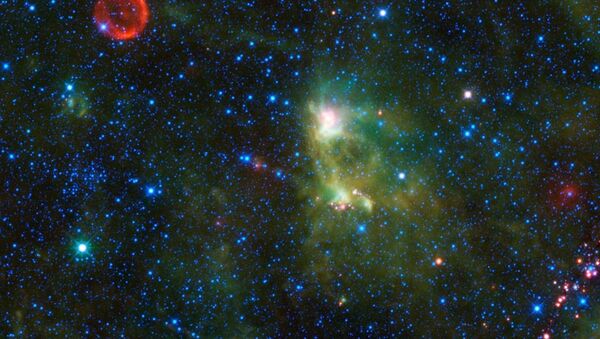 As an increase in forest fires, combined with global climate change, is thought to have encouraged the formation of grasslands with open landscapes requiring the ability to get around on two feet, prehistoric humans faced the necessity to adapt to the new surroundings in order to more effectively provide for their living.

Supernovae, which are a result of the explosion of numerous stars that have reached the end of their life, released such an overwhelming amount of energy on our planet that this could have caused our ancient ancestors to learn to walk upright, according to a new study published this week in the Journal of Geology.

The research, from the University of Kansas, suggests that electrons from the massive cosmic radiation, which peaked 2.6 million years ago, could have caused an uptick in the number of lightning strikes, sparking more massive forest fires around the globe, with severely burnt swathes of woodland eventually turning into savannas. Proto-humans, aka prehistoric humans, who were largely used to moving on all fours, then had to adapt to the new living conditions by standing up on their two legs:

“After this conversion to savanna, they would much more often have to walk from one tree to another across the grassland, and so they become better at walking upright”, lead author Adrian Melott, a professor emeritus of physics and astronomy at the University of Kansas, said in a news release, before continuing:

“They could see over the tops of grass and watch for predators. It's thought this conversion to savanna contributed to bipedalism as it became more and more dominant in human ancestors".

The evidence of much increased ionisation, due to the supernovae explosions 160 light years away, was notably found in abundance on the ocean bed — multiple iron-60 deposits from seafloor samples from all around the world have suggested that the supernovae explosions date back to the transition period between the Pliocene Epoch and the Ice Age. It is the lower-atmosphere ionisation that has primarily entered the scientific spotlight, as it resulted in a glut of electrons, the researchers contended.

“Usually, you don't get lower-atmosphere ionization because cosmic rays don't penetrate that far”, Melott specified, going on to state that  the more energetic rays from supernovae come right down to the surface, “so there would be a lot of electrons being knocked out of the atmosphere", the scientist concluded.