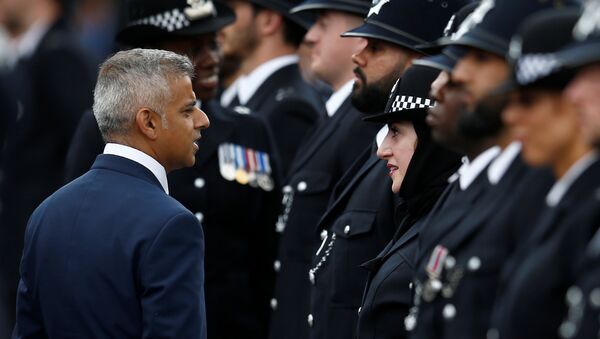 Khan has been the subject of often stinging criticism during his tenure as London's de facto political chief for being 'soft' on crime and failing to curb the epidemic of violence that has engulfed the UK capital in recent years. US President Donald Trump has even publicly criticised him, saying he'd done a "terrible job" on terrorism.

Violent crimes have soared in London since Sadiq Khan became Mayor in May 2016 figures compiled by Gareth Bacon, leader of the Conservatives in the London Assembly, have revealed.

The report — The Cost of Khan - accuses Khan of "complacency, incompetence and shirking responsibility", recording knife crime has increased by 52 percent, burglary 17 percent and robbery 59 percent, and homicides 24 percent to 135 (the highest total for over a decade) over Khan's first three years in office. He is also accused of failing to take responsibility, blaming other factors such as drill music and middle-class dinner parties for the metropolitan crime wave instead.

"As Mayor, Sadiq Khan has repeatedly avoided taking responsibility for his failure to keep Londoners safe and deliver on his promises. Instead of getting a grip of the violent crime epidemic, Sadiq Khan has played the blame game. He has continually blamed others for the rise in violent crime and forgotten that as Mayor he is responsible for keeping London safe with Britain's largest police force at his disposal," the report states.

The exponential increases since Khan's election three years ago today are perversely ironic given Khan claimed Conservative austerity policies had resulted in "worrying rise in violent crime" in his 2016 election manifesto.

The report also slams the Mayor for breaking campaign promises on a range of issues, for instance failing to build 80,000 homes a year, freeze public transport fares and plant two million trees. He has likewise rowed back on promises to reduce the cost of bus travel, set up a publicly owned city-wide energy company and end strike action.

There should be no doubt that @SadiqKhan is failing Londoners and not delivering on policing, transport and housing. @GarethBaconAM outlines the very real #CostofKhan in today's @CityAM. #LondonersDeserveBetter pic.twitter.com/4BKDcj5ZdB

"The Mayor likes to plead poverty and deny he has the funds to keep Londoners safe, invest in our transport network or build affordable housing. However, Sadiq Khan is one of the most powerful politicians in Europe with a massive £18.5 billion budget at his disposal and an "unprecedented" grant to build 116,000 affordable homes. Khan has found millions more for spin doctors, City Hall staff and waste at Transport for London. He has also found the funds for beach parties, personality tests for Met staff and golden goodbyes for TfL executives. In March 2019, the Mayor rejected our plan to cut £83 million of waste and use the savings to put an extra 1,378 police officers on our streets," the indictment continues.

"Knife and violent crime is slowing in the capital, but Sadiq is absolutely clear it remains unacceptably high — across the country — as a direct consequence of the crippling cuts the Government has made to the police and preventative services since 2010. Ministers have cut £1billion from the police budget, reducing police officers to below 30,000 for the first time since 2003," a spokesperson said.