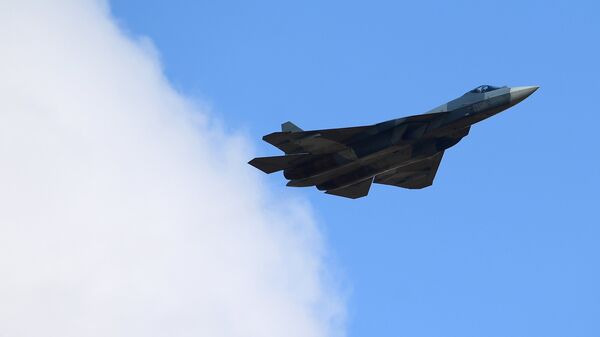 "The advanced Su-57 fifth-generation fighter will be shown to Air Force delegations and all guests of the MAKS International Aviation and Space Salon in Zhukovsky, Moscow region, from 27 August to 1 September", it said.

The statement comes after a source in the aviation industry told Sputnik in March that Russian Su-57 fighter jet already has an export permit, and the Russian government is reviewing documents to officially rename the aircraft from T-50 internal designation to Su-57.

'Ghost' in the Air: WATCH 'Aggressor' F-16 Disguised as Su-57 Take to the Skies
In 2017, a pair of Su-57 fighters for the first time demonstrated elements of air combat at the MAKS air show. One of the aircraft conducted an attack, and the second went away from it, showing how super-maneuverability works, which allows the aircraft to "dodge" the enemy. Pilots also demonstrated aerobatics, including the Pugachev Cobra, flying at extreme angles of attack and driving at minimum speed.

Su-57 is a stealth air superiority fighter created by Russia's Sukhoi Company. The fifth-generation fighter jet, formerly known as Prospective Airborne Complex of Frontline Aviation (PAK FA), is a single-seat, twin-engine multirole "stealth" aircraft developed for air superiority and attack roles. The figheter is equipped with an advanced avionics system and airborne active phased array radar as well as with a variety of high-precision weaponry.