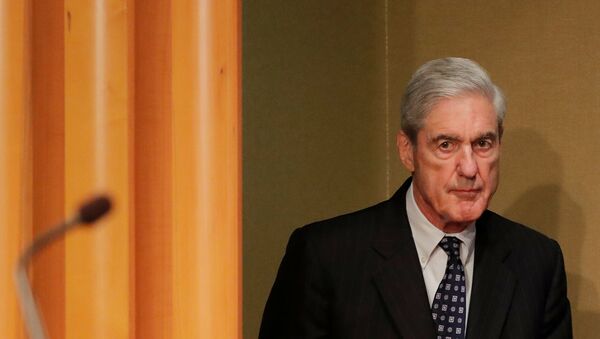 © REUTERS / Jim Bourg
Subscribe
International
India
Africa
Special Counsel Robert Mueller's investigation took 22 months to determine that Trump's campaign didn't collude with Russia to win the 2016 election and did not establish whether the US president had obstructed justice. The results were satisfying for Trump, but raised numerous questions from the Democratic side of the isle.

Speaking at a press conference on 29 May, Special Counsel Robert Mueller addressed several issues that arose following the publication of, at first, a four-page summary and then a redacted version of the full report on his almost two-year-long investigation into accusations against Donald Trump and his election campaign.

The conclusions of the report seemingly satisfied US President Donald Trump and most congressional Republicans, but left many Democrats with questions and the desire to call on Mueller to testify.

Mueller once again reiterated his position, which was put forth in the original report, that his team didn't determine whether Trump had obstructed justice or not, refusing once again to either exonerate him or accuse him of a crime.

"After that investigation, if we had had confidence that the president clearly did not commit a crime we would have said so. We did not however make a determination as to whether the president did commit a crime. Beyond what I've said here today and what is contained in our written work, I do not believe it is appropriate for me to speak further", the special counsel said.

However, Mueller specifically noted that charging the president with a crime "was not an option" that his team could consider and thus refrained from concluding whether Trump had committed a crime or not. He added that in his opinion, it was not "fair" to accuse the president without being able to charge him under existing Department of Justice guidelines and thus give Trump an opportunity to prove his innocence in court.

The special counsel further confirmed that there were "systematic efforts" to interfere in the US presidential election in 2016, but reiterated the report's findings, saying that the investigation didn't find any evidence of a "broader conspiracy" involving Trump.

Mueller also addressed concerns about the manner in which his report had been made public and praised the attorney general's decision to release most of it instead of just outtakes. The special counsel noted that he had himself requested that only certain portions of the report be published.

Addressing the pending issue of calling him before Congress to testify, Mueller stated that he would not say anything beyond what was said in his final report, stressing that the report is in fact his testimony.

During his short presser, Mueller didn't take questions and left many, mostly coming from Hill Democrats, unanswered. For instance, he didn't elaborate any further on certain aspects of the investigation into the Trump campaign's alleged collusion with Russia or other purported wrongdoings during the campaign.

Most, if not all, of the 60 questions that Democrats had prepared for Mueller in case he testifies before Congress remain unanswered. Among them were demands for an explanation as to the reasons behind Paul Manafort agreeing to work for Trump's campaign free of charge during the 2016 election and for Mueller to comment on reports about foreign policy adviser George Papadopoulos allegedly claiming that Russia had "dirt" on Hillary Clinton and others.

The special counsel also didn't comment on questions about the possible role of third-parties like Cambridge Analytica, AggregateIQ (AIQ), or the SCL Group in the alleged transfer of information relating to the elections to Russia.

Some questions from the Democrats' list were answered by Mueller indirectly. Namely, Mueller didn't reveal how he justified his refusal to reach a decision on accusations against Trump's alleged obstruction of justice to Attorney General William Barr, but still managed to explain his general position on the matter during the presser.

Mueller also didn't specify whether he had discussed with Barr what ruling he would have made regarding obstruction of justice if he would have made a "traditional prosecutorial judgment". Mueller noted that he wanted to add nothing to what was said in his report on the matter of accusations against Trump and his campaign and to what was mentioned during his short presser.

In contrast to the Democrats, most Republicans were content with the investigation's results, although one Republican congressman, Doug Collins, supported bringing Mueller to the Hill to give a testimony in order to ask him about the origins of the investigation and the reasoning behind it. His question was also addressed by the special counsel only partially during the presser, as he said that the investigation had started with accusations against Trump based on allegations that had to be checked.

READ MORE: Mueller Report Was Disappointment to Democrats so they Want 'Do Over' — Trump

Special Counsel Robert Mueller's investigation began on 17 May 2017 following a wave of accusations against Trump's campaign of colluding with Russia to affect the outcome of 2016 presidential election, as well as Trump's alleged attempts to cover it up. The US president repeatedly slammed the investigation, calling it "unprecedented presidential harassment" and a "witch hunt".

The probe concluded on 19 April 2019 and ruled that there was no collusion between the Trump campaign and Moscow, although several former aides wound up behind bars after crimes unrelated to the campaign were uncovered. At the same time, Mueller refused to fully exonerate President Trump of obstruction accusations, but also refused to accuse him of any.