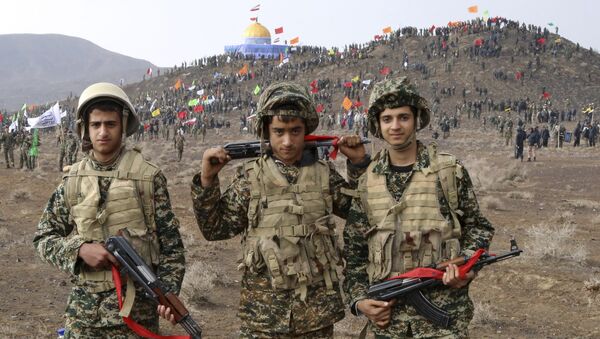 © AP Photo / Fars News Agency, Vahid Naderi
Subscribe
International
India
Africa
Over recent weeks, the US has been amassing military forces at Iran’s doorstep, accusing the Islamic Republic of plotting an attack on American interests. Washington claims that Tehran was behind recent attacks on commercial vessels in the Strait of Hormuz and Saudi oil facilities, something that Iran has vehemently denied.

The chief commander of Iran’s Islamic Revolution Guards Corps (IRGC), Major General Hossein Salami, insisted that Iran would have the upper hand if things came to a showdown with its adversaries.

“Today, we are a great and invincible power because we have experienced and defeated all of the enemy’s scenarios. We have been able to shatter enemy psy-ops and dry up the enemy’s capacity for war,” Salami said, as cited by the Iranian broadcaster Press TV.

According to the commander of the elite group, Iran has developed into “a robust power in the region” and is not confined within its borders. He also voiced his disdain for Iran’s enemies’ “threats” and “intrigues”.

“We are not worried by enemy intrigues and are in the last phase of the battle against it. We have received so many threats that we are saturated with them,” the head of the IRGC, which the US earlier blacklisted as a terror group, said.

The showdown intensified this spring, when the Pentagon deployed an aircraft carrier strike group and a bomber task force near Iran in response to what Washington called a potential threat from Tehran. On numerous occasions, the US has accused Iran of plotting an attack on its interests. So, the US officials alleged that "Iranian or Iranian-backed proxies" were behind what the UAE Foreign Ministry called "sabotage operations" against four oil tankers off the coast of the Fujairah, in the United Arab Emirates, earlier this May.

Tensions between the two countries have been running high between Tehran and Washington for a year, since Donald Trump scrapped the nuclear agreement in May 2018. In less than a year, Washington has unveiled massive batches of sanctions against the Middle Eastern country, targeting Iran's financial, transport, and military sectors, although Iran has repeatedly rejected nuclear weapons aspirations. Iranian President Hassan Rouhani had accused Washington of seeking “regime change” in Iran, branding the Trump administration as the most hostile that the Islamic Republic had faced off against.