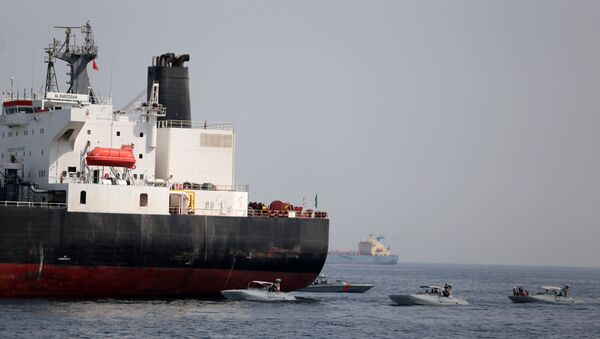 Earlier, US National Security Adviser John Bolton claimed that the oil tankers in the UAE were "almost certainly" damaged by Iranian naval mines.

Iranian Deputy Foreign Minister Abbas Araghchi said the Islamic Republic denies accusations of Tehran being involved in the attack on the UAE-based oil tankers — allegations that were earlier levelled by the US national security adviser. He called the claims "ludicrous" and accused National Security Adviser John Bolton and "other warmongers" of plotting against Iran.

Bolton earlier claimed that the naval mines involved in the attack on several oil tankers near the UAE port "almost certainly [came] from Iran" without elaborating on what information his claims were based. Two Saudi, one Norwegian, and one UAE oil tankers were damaged in the result of sabotage in the UAE's exclusive economic zone in the Gulf of Oman in May. The incident didn't cause any oil spill or casualties.

The US has repeatedly claimed that Iran, or its "proxies", was behind the incident without providing any proof. At the same time, neither the UAE nor Saudi Arabia, whose tankers were damaged, have accused Iran of misconduct.

'War Will Be a Disaster for Everybody'

Deputy Foreign Minister Minister Abbas Araghchi further stated that certain people are trying to push the US into a war with Iran in a bid to attain their goals. The deputy minister noted that Iran is ready for war with the US, but would prefer to begin a dialogue instead.

The deputy minister also reiterated President Donald Trump's statement that the US does not want war with Iran, stating that Washington must first take steps to prove this claim.

"But what matters for us are actions, not words […] We expect them to take actions, words are not enough", he said.

Araghchi also addressed the issue of the recent US military build-up in the Middle East, which, as he stressed, could create new challenges in the region. He said that Iran is still waiting for a response from Gulf States to a proposition to sign a nonaggression pact. The deputy minister acknowledged that the process of reviewing the suggestion might take time, but expressed hope for a positive response to it.

"Iran is fully prepared to go for any confidence-building measures to establish good, constructive and friendly relations with each and every country in the area", Araghchi said.

Amid an ongoing pressure campaign against Iran, the US has increased its military presence in the Middle East, sending an aircraft carrier strike group to the Persian Gulf and deploying an additional 1,500 troops, as well as a regiment of B-52 bombers, to the region.

The military build-up was accompanied by President Donald Trump repeatedly warning Iran against attacking the US or its allies in the region, threatening that doing so would be the "official end of Iran". Tehran lambasted the threats and vowed to "resist" the US until it retreats. Iranian Supreme Leader Ali Khamenei further added that Iran does not seek war with the US.

Possibility of Talks With US

At the same time, Araghchi said that at the moment Tehran is planning no talks, neither direct, nor indirect, with Washington while being "under pressure". Araghchi added that the US must provide compensation for the losses that Iran has incurred over the last year due to Washington's withdrawal from the nuclear deal.

"What we expect them [to do] is to respect the JCPOA, to compensate Iran's losses […] and to respect Iran's rights in the deal", the deputy minister said.

The deputy minister's statements come following Iranian President Hassan Rouhani on 29 May indicating that negotiations between Tehran and Washington would become possible only after the US lifts sanctions on the Islamic Republic.

"Whenever they lift the unjust sanctions and fulfil their commitments and return to the negotiations table, which they left themselves, the door is not closed", he said.

Relations between the US and Iran have worsened since Washington withdrew from the Joint Comprehensive Plan of Action (JCPOA), also known as the Iran nuclear deal — an international accord reached in 2015 that lifted sanctions on imposed Tehran in exchange for limitations on its nuclear programme. Following the unilateral withdrawal, the US imposed sanctions on Iran's energy, banking, and shipping sectors.

Despite the efforts of JCPOA signatories to salvage the deal, Iran announced that some of the states had failed to resist US pressure and announced that it would suspend some of its "voluntary" JCPOA commitments. Russia and China accused the US of trying to destroy the accord.

READ MORE: ‘No Talks With US': Iran Ready to Negotiate With All Gulf States — Deputy FM

The Trump administration in turn argued that the sanctions would force Iran back to the negotiation table in order to sign a new, "better" deal. Tehran has repeatedly rejected such suggestions and argued that it won't negotiate under pressure.