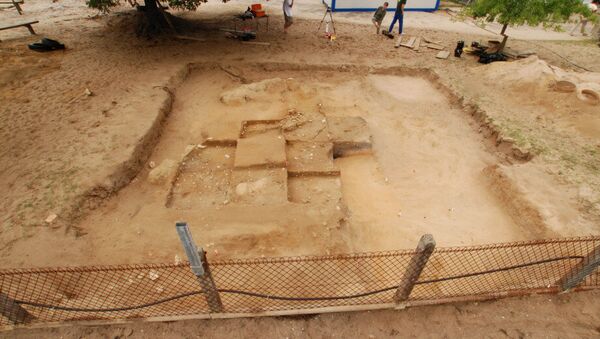 The site was first discovered accidentally near Bordeaux in 2006, when a group of schoolchildren found human remains in their playground.

Researchers say that people used this burial site for 2,000 years. However, the reason why people were drawn to it for so long remains unknown, the website Phys.org reports.

According to Hannah James, a Ph.D. candidate at Australian National University, at first it was assumed that the site had been used only by the Bell Beakers, among the first cultures to develop in Europe.

"We now know people were actually coming back to this site and burying their bodies there again and again, from the Neolithic to the Iron Age…We're looking at remains from around 3600 BCE, all the way through to around 1250 BCE," Ms. James said.

What is strange about the discovered cemetery is its location, the scientist says.

"It's a mound about 50 cm deep. It's not on a hill or in an obvious location, so there's something else about this site which caused people to come back and use it."

The researchers used radiocarbon dating and analysed four different isotopes to collect more information about the people who were buried there.

"Carbon and nitrogen tell us about what kind of food they were eating. They were eating food from the land. Strangely it doesn't look like they were hunting and gathering from the nearby river, or the ocean, which is 10 kilometres away. That doesn't change over time."

One individual was born in a colder climate, like the Pyrenees Mountains to the south, but was buried there; it is unclear if he had migrated to the Le Tumulus des Sables region, or whether his body was brought there for burial, Ms. James said.

"We found a lot of baby teeth, as well as teeth without full roots, which means the person died in childhood, while the tooth was still forming," the scientist added.

Archaeologists also found a variety of metal, pottery and animal bones at the site, which made the process of identification of human remains more difficult.