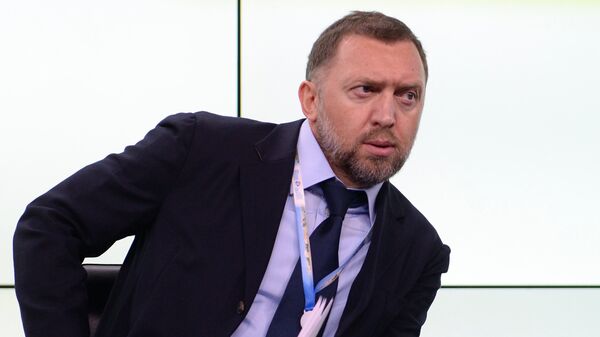 © Sputnik / Alexey Filippov
/
Go to the mediabank
Subscribe
International
India
Africa
Russian businessman Oleg Deripaska's representatives have slammed the evidentiary memorandum issued by the US Treasury's Office of Foreign Assets Control, which justifies sanctions against him, as a poorly compiled document that is full of false claims and factual inaccuracies and guided by considerations of personal revenge.

Here is the full text of the statement by Deripaska's office obtained by Sputnik.

OFAC has submitted an evidentiary memorandum, compiled in support of Mr. Oleg Deripaska's designation. In summary — this is a poorly researched report riddled with false statements and factual inaccuracies. It's outrageous that there seems to be no burden of proof required for OFAC's bureaucrats to indulge personal vendettas by ruining a man's life, his businesses and leaving at risk hundreds of thousands of people, including workers and members of the community, as well as investors (Russian and international). This is more than professional incompetence — it looks like nothing short of gross misconduct in public office and raises substantial questions about the integrity and true intentions of OFAC's investigations.

According to the document, Mr. Deripaska was designated based on two allegations:

(1) having acted or purporting to have acted for a Senior Russian Government Official; (2) operating in the energy sector of the Russian Federation.

Both claims are patently false.

This first allegation appears bizarrely to be based on a decade-old article in The Nation titled ‘McCain's Kremlin Ties' published five weeks before the US 2008 presidential elections. Citing a single unnamed source, claiming to be "a close associate" of Mr. Deripaska, the article falsely asserted that Mr. Deripaska purchased the KAP aluminum plant in Montenegro as part of a Russian plot spearheaded by President Vladimir Putin to effectively seize control of Montenegro's economy following the country's independence.

To be clear — KAP was acquired by a company SMR (and later transferred to another company, CEAC) not for political reasons or because President Putin or any other Russian government official encouraged them to do it. The acquisition was driven by commercial reasons with the aim of turning it into a successful commercial enterprise. The decision was made following numerous rounds of negotiations and management debates within the company. KAP has never been central to the economy of Montenegro, so the suggestion that it could have been bought for political reasons is utterly absurd and ignores commercial, political and economic reality.

It was the government of Montenegro that reached out to SMR about the investment and potential acquisition, as they had been immensely impressed by the efficient performance of RUSAL, the greenest aluminum producer in the world that Mr. Deripaska founded.

The acquisition took place following significant due diligence that included detailed surveys and technical audits, conducted by the management of SMR. This due diligence process took more than eight months and resulted in an independent determination that the KAP smelter's proximity to the sources of raw materials, an electricity supply source, and a viable shipping port made it a strong investment.

In the fall of 2005, the flow of investments continued to cover other components critical to the development of the KAP smelter, including a nearly 1/3 share in a bauxite mine with plans to acquire a nearby electricity source and coal mine. The aluminium production process requires huge amounts of electricity. The government of Montenegro committed to supplying the smelter with electricity at a fixed rate. However, the rate was later significantly increased, and some other important conditions were never implemented, which left the smelter unprofitable. KAP was eventually declared bankrupt and offered for sale, with the bid won by a government-owned company.

Anyone following this case might also be reminded that late Senator John McCain was a strong supporter of Montenegrin independence. He brought up the issue of Montenegrin independence referendum in a conversation with Mr. Deripaska that took place in one of the Montenegrin cities. Following that discussion SMR hired Mr. Paul Manafort as a consultant to conduct research and run opinion polls to analyze the political situation in the country where a substantial investment was to be made.

The memorandum also refers to a quote from Mr. Deripaska's interview to the Financial Times saying "I don't separate myself from the state". This comment, however, was taken completely out of context. The interview took place in 2007, when Russia's most prominent businessmen were leaving the country to invest across the border and spend their time in London. The question Mr. Deripaska was asked was why he chose to stay in Russia. The point that he made was simply that he doesn't detach himself from his homeland and can't imagine his future anywhere else. He said he wants to develop his business in Mother Russia, including not only aluminium producer Rusal, but also a carmaker GAZ Group, as it was Mr. Deripaska's goal and ambition to make it Russia's biggest commercial automaker. This is what he was saying, but the quote was distorted and has since gone on to take on a life of its own.

World
Deripaska Office Calls OFAC Memorandum on Sanctions Justification Groundless Accusations
It is extremely important to stress that the mere inclusion of Mr. Deripaska in the list of so-called oligarchs indicates total ignorance of compilers. Just like Mr. Gapontsev, a US citizen who found his name on the Treasury list (currently suing US Government), Mr. Deripaska never took part in the "loans for shares" deals or any other questionable acquisitions, i.e. his wealth has not been derived from corrupt grants of public assets of the Russian Government.

(2) Operating in the energy sector of the Russian Federation

The second reason OFAC used as a basis for Mr. Deripaska's designation is his alleged "operating in the energy sector of the Russian Federation". This is grossly misleading and once again suggests that the bureaucrats working for OFAC were either extremely poorly informed on the details of Mr. Deripaska's business, or deliberately chose to ignore the fact that EN+ — a company which Mr. Deripaska founded — is not an energy company (operating in the oil and gas sector), but rather an electrical utility business where power generation represents less than 20-25%. This is directly stated in the company's IPO prospectus, which OFAC has seen. Moreover, Mr. Deripaska didn't manage EN+, he was an investor in this business — which is also clearly stated in the IPO prospectus.

OFAC also refers to the fact that Mr. Deripaska attended global forums, such as WEF and APEC CEO Summit, in support of their claim that Mr. Deripaska operates in the energy sector. This is, again, an inaccurate conclusion. As a major international business leader, he was of course invited to prominent global events. He's always been committed to setting high environmental standards across aluminum industry, and his core focus at these events was usually advocating for climate change initiatives. Somehow this has been used as justification for his global isolation orchestrated by DC bureaucrats..

The memo talks about the Endeavor Group having been engaged at will by Oleg Deripaska to provide general legal advice on issues involving his US visa as well as commercial transactions. Endeavor Group was indeed engaged to do consultancy work for a number of Mr. Deripaska's business projects. The FARA filing they made was a part of a usual administrative routine. The Treasury Memorandum contains an Investigator comment quoting Endeavor "FARA" filing clearly stating that Mr. Deripaska was not supervised, owned, directed, controlled, financed or subsidized by a foreign government, foreign political party or foreign principal. The same is contained in the EN+ IPO Prospectus. 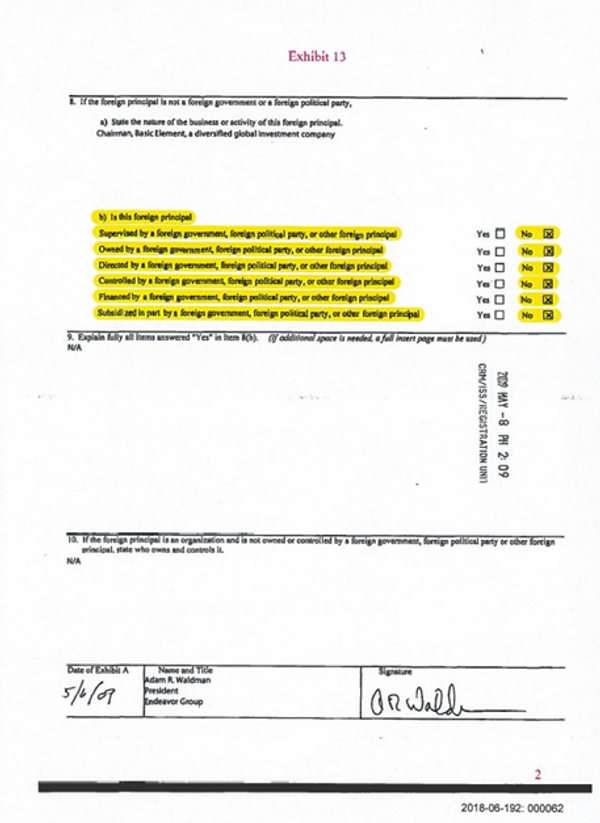 Screenshot 1 of the US Treasure document
© Sputnik

The FARA filing made by Endeavor, which was subsequently audited, on-site, over a period of a week by an entire team of Department of Justice officials who pronounced the filings and corresponding  backup materials "excellent", was transparently and consistently made during a time that we now see many did not adhere to FARA's important disclosure requirements.

US House Majority Leader Introduces Bill to Avert Lifting Deripaska Sanctions
And those transparent filings, blessed by a DOJ audit as part of their usual administrative routine, unambiguously stated that Endeavor was not working for or directed by the Russian Federation or any other government, as indeed they were not. It's hard to see how Endeavor's FARA filings evidence and corroborate the spurious allegations made by OFAC, and indeed those audited filings are utterly counterfactual to OFAC's assertions.

Moreover, the Endeavor Group was not the first and only US company advising and assisting Mr. Deripaska over the past 20 years but for some reason it is the only one mentioned in the Memorandum, underscoring the contortions OFAC has engaged in to evidence their utterly unsupported claims. 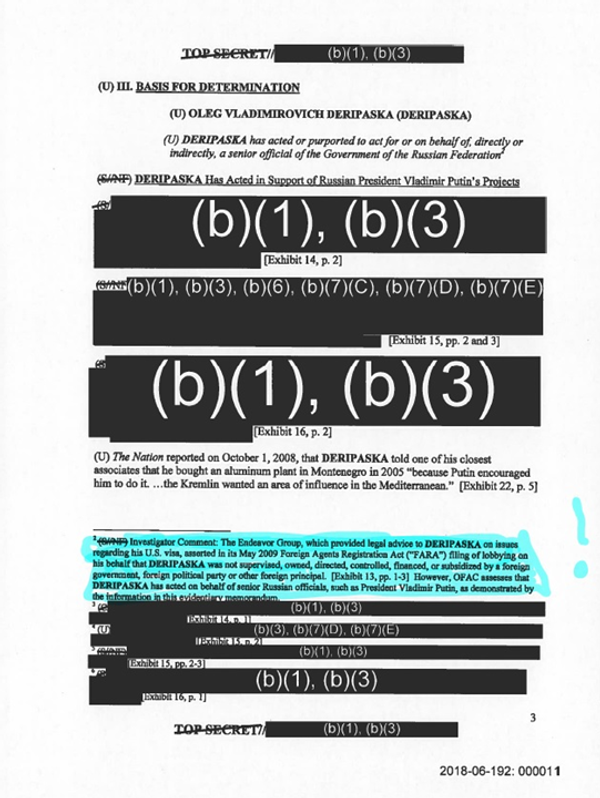 Screenshot 2 of the US Treasury document
© Sputnik

The accusations about Mr. Deripaska's alleged engagement with organized crime networks are utterly false and to this day remain completely unsubstantiated. He has never even been charged with a crime or investigated, let alone convicted. These allegations are based simply on claims made in the 1990s by Oleg Deripaska's former business rivals. No evidence to support these claims has ever been produced, nor were the motivations of those making the claims ever considered.

Overall, OFAC's report didn't produce any evidence for its tired old and false claims. It provides distorted interpretations of publicly available materials published on corporate websites and in the media. None of those materials hindered the IPO of EN+ just a few months before the sanctions were announced. This IPO was sponsored by international US banks, such as BofA Merrill Lynch, Citigroup Global Markets and J.P. Morgan Securities to name a few and verified by hundreds of lawyers working for prominent Anglo-American law firms, for example White & Case, who conducted extensive due diligence.

US Executive Orders 13661 and 13662 which OFAC based the designation on, very clearly define the possible causes for imposing sanctions and leave no room for misinterpretation. The allegations listed in OFAC's report should have been tested against the requirements set out in these EOs. However, not one of the allegations made match the EO criteria, which means that OFAC has ignored the basic principle of the American legal system — the presumption of innocence — and had zero legal grounds for the destructive actions that they have taken.

World
US Treasury Secretary Sanctioned Russia’s Deripaska by Accident - Reports
Like the Treasury's notorious rip-off of the Forbes list before it, all this so-called "Evidentiary Memorandum" does is cast further doubt on what is really driving and who is really influencing the US bureaucrats in charge of America's sanctions policy. This is why Oleg Deripaska is taking what might look like a radical step to sue the US Government. It's about demanding transparency and justice and also creating opportunities for EN+, RUSAL and GAZ Group investors, suppliers and customers to recuperate their losses that are well above 15 bln dollars.
Newsfeed
0
Access to the chat has been blocked for violating the rules . You will be able to participate again through:∞. If you do not agree with the blocking, please use the feedback form
The discussion is closed. You can participate in the discussion within 24 hours after the publication of the article.
To participate in the discussion
log in or register
loader
Chats
Заголовок открываемого материала