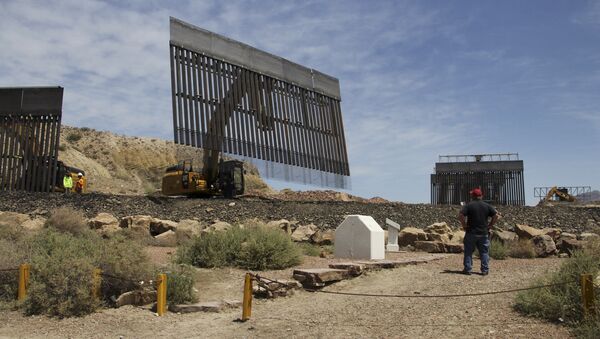 © AFP 2023 / HERIKA MARTÍNEZ
Subscribe
International
India
Africa
Several months ago, We Build the Wall group started a campaign on GoFundMe, a fundraising website, in a move to partially fulfil the Trump's administration efforts to build a wall on the US-Mexico border.

We Build the Wall, a group founded by Air Force veteran Brian Kolfage, published a post on social media on Monday, announcing that it has started the construction of a half-mile stretch of wall on private property.

"Buckle up, we're just getting started!" the group wrote in a Facebook post, while Kolfage has published a video of what was described as construction work.

The campaign has managed to gather more than $20 million in donations, while their wall will cost an estimated $6 million to $8 million.

During the fundraising campaign, some donors wondered why there were no construction works despite millions of dollars being donated; however, the campaigners said that they had to keep their plans secret to protect the project.

"Remember powerful people want to stop our progress, so to not tip anyone off while we are radio silent!" Kolfage wrote in a Facebook post.

Trump Seeks to Hand Border Wall Construction to North Dakota Firm - Report
The announcement comes days after a US federal judge in the northern district of California temporarily froze part of Trump's plan to spend billions of dollars, allocated as part of a national emergency fund, to build the wall, which Trump says will keep undocumented workers from entering the country through Mexico. Following the ban, Trump pledged to make an expedited appeal of the ruling.
Newsfeed
0
Access to the chat has been blocked for violating the rules . You will be able to participate again through:∞. If you do not agree with the blocking, please use the feedback form
The discussion is closed. You can participate in the discussion within 24 hours after the publication of the article.
To participate in the discussion
log in or register
loader
Chats
Заголовок открываемого материала