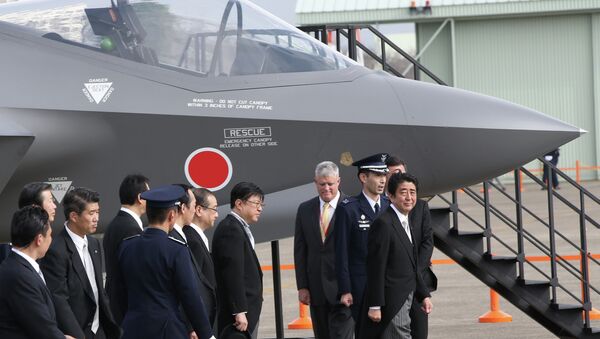 Japanese military rescue teams have discovered the wing and an engine fragment from a fifth-generation F-35A multipurpose combat aircraft, operated by the country's Air Force, which fell into the Pacific Ocean off the coast of Aomori Prefecture in the north of Honshu Island on 9 April.

The news was announced on Tuesday at a press conference in Tokyo by Defence Minister Takeshi Iwaya.

“Discovered fragments were raised to the surface, they have sustained serious damage,” Kyodo news agency quoted Iwaya as saying.

“We will continue the search; there are still scattered fragments of the aircraft lying on the seabed.”

Earlier in May, divers found part of the missing aircraft’s cockpit and the flight data recorder in the search area, however, it was missing its memory card. The reasons for the crash remain unknown.

The F-35A stealth fighter disappeared from radar screens in April during a training flight from Misawa Air Force Base in Japan. The pilot's body was not found.

The aircraft had been assembled in Japan from US components at the Mitsubishi Heavy Industries plant.

This is the first such accident involving an F-35A, since these jets are only just becoming operational in the armed forces of various countries.

Last year, a F-35B short take-off and vertical landing aircraft crashed in the US. The F-35B was modified for the Marine Corps with the ability to take off and land vertically while also providing fifth-generation electronic surveillance and weapons capabilities.

Japan plans to acquire 105 US-made stealth warplanes for its air force as well as two light aircraft carriers, thus making it home to the largest F-35 fleet of any US ally.

The news was announced by US President Donald Trump during his official visit to Japan.

“The United States supports Japan's efforts to improve its defence capabilities, and in recent months we have sent them a large amount of military equipment,” Trump said at a press conference.

READ MORE: When in Rome: Teetotaler Trump Gets Toasted With 'Champagne' in Japan

The US F-35 programme has been slammed as wildly over budget and years behind schedule.

Japan's government announced in its latest defence budget in December its intention to buy 105 F-35A aircraft, with local media saying at the time that the purchase could be worth a total of more than one trillion yen ($9.1 billion).

Japan and the United States have a long history of collaboration. In particular, the nations cooperate with respect to defence, with about 50,000 US military personnel stationed across the island nation.