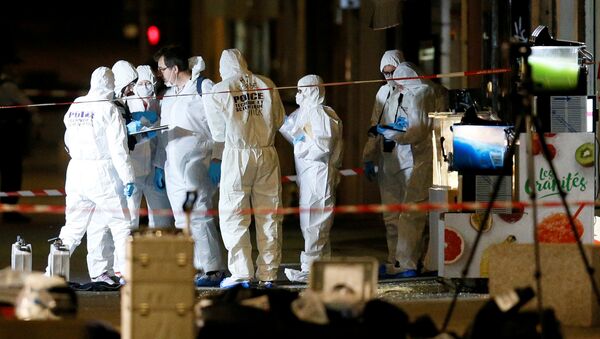 © REUTERS / Emmanuel Foudrot
Subscribe
An explosion broke out on 24 May in downtown Lyon, France near a bakery at the intersection of Victor Hugo Street and Sala Street, near Bellecour Square, one of the city's attractions. More than 10 people were injured.

According to the Parisien newspaper, the key suspect in the Lyon explosion case was identified as Mohamed Hichem M., 24, who came to France from Algeria.

French officials have yet to comment on the information.

The suspect, who was arrested on Monday, had been previously unknown to police prior to the 24 May incident, when a blast broke out in the French city of Lyon, injuring 10 people.

French Prosecutors Float Terror Conspiracy Charges in Lyon Attack - Reports
According to the French newspaper, in order to carry out an explosion, the man threw a parcel containing an explosive device at the door of the bakery, located in the centre of Lyon, as he passed by on a bicycle.

"He is in custody. But so far, he refuses to speak," a source close to the investigation told Parisien.

The police questioned the relatives of the detainee — his parents, as well as his younger brother and sister.

Earlier, law enforcement officers had searched his home, where they found the materials needed for the manufacturing of explosives.

On Monday, French police arrested two suspects in connection with the investigation into the Lyon explosion, which took place on 24 May not far from a bakery at the intersection of Victor Hugo Street and Sala Street, near Bellecour Square — one of the city's main tourist attractions.

Following the incident, more than a hundred investigators and technical experts were engaged in the search for the suspect.