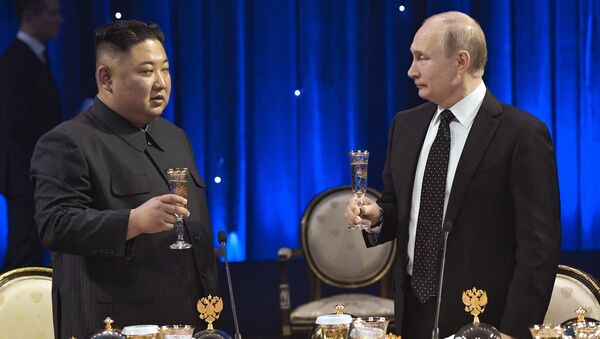 Kim Jong-un and Vladimir Putin met in the eastern city of Vladivostok on 25 April, marking their first-ever tete-a-tete meeting.

A gaffe occurred during the reception of North Korea's Kim Jong-un as he arrived in Russia for a summit with Vladimir Putin.

It appears a recording of a South Korean song was played during a welcoming ceremony for the North Korean leader.

Maj. Pavel Gernets, who leads the elite Honor Guard's Special Military Exemplary Band, said the North Korean delegation had an "aggressive" reaction but everything worked out in the end.

Speaking at a conference on protocol, Maj. Gernets said that one should be extremely careful when choosing what national tunes to play at official international events, because what may look neutral at first sight can anger foreign guests.

To make sure everything goes smoothly, the military band sounds out the subtle aspects of an upcoming meeting in the Foreign Ministry and the Protocol Service.

Maj. Gernets recalled a similar story that happened in the Soviet times, when an American delegation was visiting the Far East.

Back then, the guests were seen off with Legendary Sevastopol, a patriotic Soviet Navy song about the city of Sevastopol, where Russia's Black Sea Fleet is headquartered.

What could possibly go wrong, one would think. The director recounted that after the plane with the Americans took off, he received a telegraphed message inquiring why they listened to a song with the lines that might be translated as follows: "Shall the enemies come to our land from across the ocean wielding a sword, we'll meet the uninvited guests with exterminatory fire".

The rest of the story is mired in mystery.