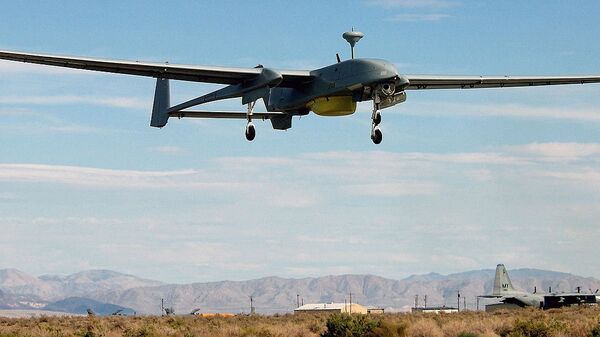 The reported incident follows a riot which broke out after Israel installed security cameras along the Blue Line, the internationally recognised dividing area between Israel and Lebanon. It emerged after the Jewish state launched Operation Northern Shield last year to destroy Hezbollah’s attack tunnels, which had been dug from Lebanon into Israel.

The Lebanese television network Al-Mayadeen has alleged that an Israeli Defence Force (IDF) unmanned aerial vehicle had tracked and destroyed an IDF spying device in Lebanon.

It was reportedly obliterated between the villages of Nmairiyeh and Zefta in Lebanon’s southern area, where the country’s security forces are working to locate remains of the device. The IDF has not yet commented on Al-Mayadeen’s claims.

The reported incident comes after the IDF troops dispersed a crowd of about 15 Lebanese nationals along the northern border after they'd scaled the border fence and tried to damage it, according to IDF officials.

The Blue Line was installed after the Israeli army launched Operation Northern Shield in November 2018 in order to expose and neutralise cross-border attack tunnels that the militant group Hezbollah dug from Lebanon into Israel, exacerbating tensions between the neighbouring countries.

War Between Israel-Lebanon Can Become 'Full-Blown Regional War’ - Journalist
Israel and the United Nations consider the tunnels a violation of UN Resolution 1701, adopted to end Israel's 2006 war with Hezbollah, which has been blacklisted by the Jewish state as a terrorist organisation.

The existence of the tunnels was confirmed by the United Nations Interim Force in Lebanon (UNIFIL).

On 13 January, the IDF announced the completion of Operation Northern Shield after locating and destroying a sixth attack tunnel dug by Hezbollah.