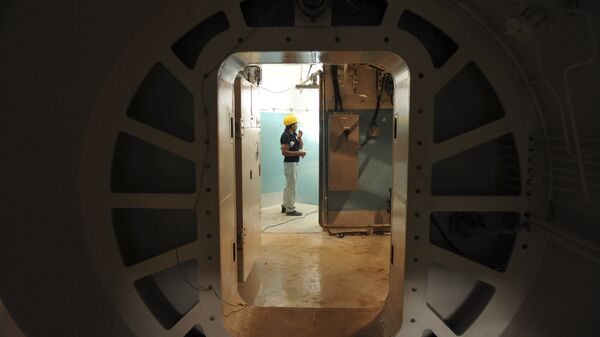 “Our enemies have been raising a lie for 20 years that Iran wants to make an atomic bomb. Of course, the IAEA [International Atomic Energy Agency] and other bodies have repeatedly visited Iran, extensive talks were held and 6 world powers [the group 5+1] admitted that Iran is not going towards a nuclear bomb”, Jahangiri told reporters in Tehran on Tuesday.

He underscored that the IAEA visited Iran several times, presenting “14 reports that Iran has not had any diversion towards nuclear weapons”. He also warned the US and its allies against a military conflict with Tehran, urging Washington to stop pressure on Iran and improve regional security.

Jahangiri was apparently referring to a previous statement on Iran by Donald Trump made after his talks with Japan's Prime Minister Shinzo Abe in Tokyo earlier this week.

“I'm not looking to hurt Iran at all. I'm looking to have Iran say, ‘no nuclear weapons’,” Trump said, adding that “nobody wants to see terrible things happen, especially me”.

In a separate development, Iran’s Ambassador to France Bahram Qassemi emphasised on Tuesday that “nuclear weapons have never had any place in the defence doctrine of the Islamic Republic”.

He recalled that the peaceful nature of Iran’s nuclear programme and the country’s drive not to seek atomic weapons were specifically mentioned in a religious decree issued by Iran’s Supreme Leader Ayatollah Ali Khamenei.

On May 8 2018, US President Donald Trump announced Washington’s unilateral withdrawal from the JCPOA, reinstating strict economic sanctions on Iran.

UK Special Forces ‘Joining US Strike Force’ in Gulf Amid Iran Tension - Report
Exactly a year later, Tehran announced that it would backtrack on some of its “voluntary” commitments under the Iran deal, giving European signatories 60 days to ensure that Iran's interests were protected under the agreement, a move that exacerbated US-Iranian tensions.

After Washington imposed more anti-Iranian sanctions aimed at the Islamic Republic’s iron, steel, aluminium, and copper sectors, the US deployed an aircraft carrier and a bomber task force to the Middle East to contain what the White House describes as a threat emanating from Iran.

Tehran has repeatedly denied the allegations, condemning the US' sabre-rattling as “psychological warfare” and expressing readiness to retaliate against a potential military operation.