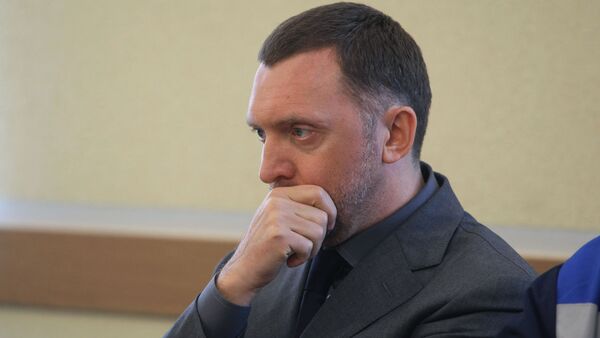 © Sputnik / Alexey Nikolskiy
Subscribe
International
India
Africa
MOSCOW (Sputnik) - Russian businessman Oleg Deripaska's representatives slammed the evidentiary memorandum issued by the US OFAC, which justifies the sanctions against him, as a poorly compiled document that is full of false claims and factual inaccuracies guided by considerations of personal revenge, according to a statement by Deripaska's office.

In April 2018, the United States included Deripaska and companies controlled by the businessman, namely En+ Group and the entities it controls, Rusal and JSC EuroSibEnergo, in the Specially Designated Nationals (SDN) list. Assets of SDN-blacklisted individuals and entities in the United States are frozen and US companies are banned from working with them.

On January 27, 2019, the US Treasury lifted the sanctions on the three companies after Deripaska reduced his stake in the En+ Group under 44.95 percent and stopped running it via the board of directors.

On Tuesday, after a long resistance, the OFAC complied with a court order to release its list of documents substantiating sanctions against Deripaska. The so-called evidentiary memorandum alleges that the businessman was acting on behalf of a senior government official and working in the Russian energy sector. These claims served as justification for including Deripaska on the SDN list. Evidence largely includes articles from Western media, information from anonymous sources and assumptions.

The memorandum is dated June 2018, but the US Treasury had refused to publish it until compelled to do so by US order. At the same time, many fragments remain redacted, possibly due to concerns that confidential sources would become public.

"It’s outrageous that there seems to be no burden of proof required for OFAC’s bureaucrats to indulge personal vendettas by ruining a man’s life, his businesses and leaving at risk hundreds of thousands of people, including workers and members of the community, as well as investors (Russian and international). This is more than professional incompetence — it looks like nothing short of gross misconduct in public office and raises substantial questions about the integrity and true intentions of OFAC's investigations," the businessman's office said.

The press service also refuted both statements that served as foundation to blacklist the businessman — that he allegedly acted on behalf of a senior Russian government official and that he operated in the Russian energy sector.

"Both claims are patently false," the office said.

PURCHASE OF PLANT IN MONTENEGRO

The office has also commented on the OFAC's reference to an article published by The Nation magazine, titled "McCain’s Kremlin Ties," on October 1, 2008.

"This first allegation appears bizarrely to be based on a decade-old article in The Nation... published five weeks before the US 2008 presidential elections ...The article falsely asserted that Mr. Deripaska purchased the KAP aluminum plant in Montenegro as part of a Russian plot spearheaded by President Vladimir Putin to effectively seize control of Montenegro’s economy following the country’s independence," the office said.

According to the office, the plant was purchased "not for political reasons or because President Putin or any other Russian government official encouraged them to do it."

The deal was guided by legal commercial considerations, the press service said.

"KAP has never been central to the economy of Montenegro, so the suggestion that it could have been bought for political reasons is utterly absurd," the office explained.

TAKEN OUT OF CONTEXT

US House Majority Leader Introduces Bill to Avert Lifting Deripaska Sanctions
In claiming that Derispaka represented the Russian state, the US Treasury referred to an article in The Financial Times published on October 28, 2008. According to the report, the businessman said that he would give up his company if the Russian government asked him to.

"The question Mr. Deripaska was asked was why he chose to stay in Russia. The point that he made was simply that he doesn’t detach himself from his homeland and can’t imagine his future anywhere else. He said he wants to develop his business in Mother Russia, including not only aluminium producer Rusal, but also a carmaker GAZ Group, as it was Mr. Deripaska’s goal and ambition to make it Russia’s biggest commercial automaker. This is what he was saying, but the quote was distorted and has since gone on to take on a life of its own," the office said.

The office also stated that the US Treasury's mention of Deripaska's diplomatic passport was completely irrelevant to his designation as a blacklisted individual.

"Mr. Deripaska was entitled to obtaining a diplomatic passport as a Russian member of the APEC Business Advisory Council (ABAC). Members of ABAC from all APEC economies, including the U.S., are appointed by their governments, which is sufficient ground to be issued a diplomatic passport to fulfill entrusted responsibilities," the office said.

The businessman's representatives also refuted the OFAC's claims that Deripaska was allegedly involved in the Russian energy sector as an attempt to mislead.

"[The claim] once again suggests that the bureaucrats working for OFAC were either extremely poorly informed on the details of Mr. Deripaska’s business, or deliberately chose to ignore the fact that EN+ — a company which Mr. Deripaska founded — is not an energy company (operating in the oil and gas sector), but rather an electrical utility business where power generation represents less than 20-25%," the office said.

Deripaska's visits to global forums, such as the World Economic Forum and Asia-Pacific Economic Cooperation CEO Summit, by no means support the OFAC's claims that the businessman was alleged involved in the energy industry, the office said. The OFAC reached "an inaccurate conclusion" by inferring the opposite, the office added.

"As a major international business leader, he was of course invited to prominent global events. He’s always been committed to setting high environmental standards across aluminum industry, and his core focus at these events was usually advocating for climate change initiatives," Deripaska's office said.

Additionally, the US Treasury's claims about Deripaska's links to organized crime networks "are utterly false and to this day remain completely unsubstantiated," the office stressed.

World
US Treasury Secretary Sanctioned Russia’s Deripaska by Accident - Reports
"He has never even been charged with a crime or investigated, let alone convicted. These allegations are based simply on claims made in the 1990s by Oleg Deripaska’s former business rivals. No evidence to support these claims has ever been produced, nor were the motivations of those making the claims ever considered," the press service said.

The businessman's representatives stated that the OFAC document had failed to provide "any evidence for its tired old and false claims".

"It provides distorted interpretations of publicly available materials published on corporate websites and in the media," the office concluded.