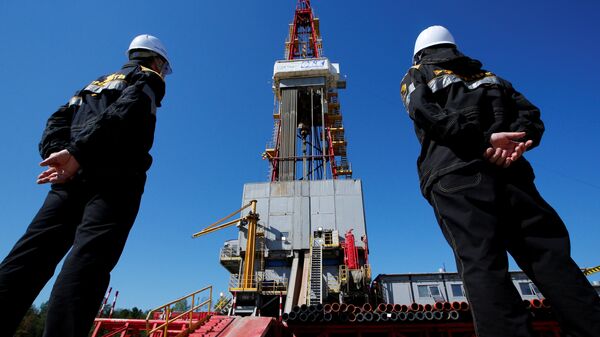 © REUTERS / Sergei Karpukhin/File Photo
Subscribe
International
India
Africa
Washington is seemingly set to replace its Venezuelan oil imports with Russian crude, although the US earlier subjected Russian energy producers to sanctions cutting them from investment and exploration technology. Economists Dr Mamdouh Salameh and James L. Williams have explained what is behind the increase in Russian oil sales to the US.

The US has stepped up imports of Russian crude after imposing tough sanctions on the Venezuelan energy sector in January 2019, Bloomberg reported on 20 May, citing Russ Dallen, a managing partner of Caracas Capital Markets.

Only in the first half of May, Washington imported 5 million barrels of oil and petroleum products from Russia, while in January and February the hydrocarbons imports from the country amounted to 9.9 and 6.1 million barrels, respectively, according to the US Energy Information Administration (EIA).

"US refineries are increasing their oil imports from Russia as Venezuelan oil supplies have dried up. The United States took a total of 5 million barrels of Russian crude so far this month and more are on the way", says Dr Mamdouh Salameh, an international oil economist. "Any increased volumes of Russian oil going to the United States could be viewed as a hedge against the money Russia has lent to Venezuela".

The question then arises as to why the US has increased crude purchases from Russia instead of buying oil from its traditional allies in the Persian Gulf, especially given the fact that Russia's energy sector has been recently subjected to tough sanctions from Washington over alleged Moscow's role in Ukrainian affairs in 2014 and purported interference in the 2016 US presidential election — something that the Russian leadership vehemently denies.

US to Triple Import of Russian Oil Amid Sanctions Against Venezuela - Report
Salameh outlined three major reasons behind the US decision to turn to Moscow.

The first one is that the Saudi Arabia has reduced its oil output steeply beyond the OPEC+ production cuts to ensure that crude prices surge to $80 a barrel, which is the level Saudi Arabia needs to balance its budget, he explained.

The second reason, outlined by the oil economist, is that the Asia-Pacific region remains the primary destination for Saudi crude, accounting for almost 75 per cent of the country's all oil exports.

And the third reason is that the Persian Gulf monarchies exports to the US go to augment American crude oil inventories thus allowing the US to use them to depress oil prices, Salameh elaborated.

The oil expert foresees that Washington is set to "increase its purchases of Russian crude oil by as much as three-fold this year now that Venezuela is no longer a crude supplier to the United States".

For his part, Williams pointed out that "the decision to buy Russian oil is made by individual companies not by the US".

"They will purchase the oil they need from whoever has it subject only to any sanctions", he stressed.

According to the EIA, the Russian Federation has supplied oil and petroleum products to the US since May 1995 with deliveries peaking in 2011 (227 million barrels). Over the past eight years American imports from Russia have fallen 40 percent.

Meanwhile, Venezuelan oil output has dropped to its lowest level over the past 15 years. According to the EIA May report, in April Venezuela's crude oil production "averaged 830,000 barrels per day (b/d), down from 1.2 million b/d at the beginning of the year", because of the ongoing political crisis, energy outages and most notably, US sanctions against the country's major oil producer, Petróleos de Venezuela, S.A. (PdVSA).

"Venezuela's oil industry was teetering on the brink of collapse long before US sanctions were introduced", Salameh pointed out. "It has been acutely lacking a huge injection of investments and advanced oil technology and better management to significantly raise its oil production. However, few believed Venezuela could attract the investments needed without some rapprochement with the United States".

US Demands a Halt to Jet Fuel Trade with Venezuela, Threatens Offenders with Sanctions – Report
According to the oil expert, the US-fanned political turmoil is "hampering the efforts of the Maduro government to resolve the severe problems facing the country".

He highlighted, it is Venezuela's vast oil reserves that prompted the US to crack down on the Latin American nation: "The United States must be casting envious eyes on such unbelievably huge oil wealth", the economist underscored.

Salameh quoted National Security Adviser John Bolton who had said that "the sanctions will make a big difference to the United States economically if we could have American oil companies really invest in and produce the oil capabilities in Venezuela".

The US-backed regime change attempts in have shattered the country's economy since 23 January, when Juan Guaido, the head of disempowered National Assembly declared himself an interim president of Venezuela. Since then, the country's foreign currency and gold reserves have been frozen by American and European banks.