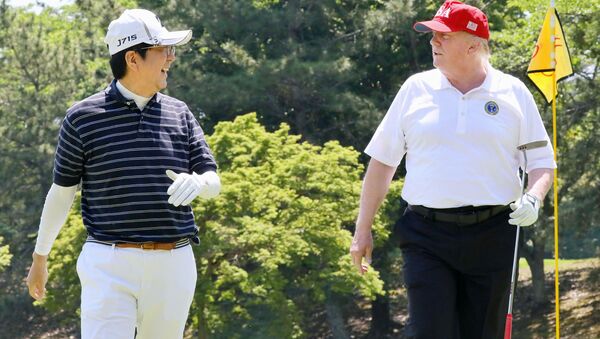 According to the report, Abe on Sunday informed Trump of his intention during the leaders' golf match and informal dinner during the US president's state visit to Japan.

Earlier this week, Abe discussed his visit to Iran with US National Security Advisor John Bolton. On 16 May, Abe discussed the idea with Iranian Foreign Minister Mohammad Javad Zarif.

Japan, a close US ally, has traditionally maintained amicable relations with Iran, a Reuters report says. During his visit, Abe wants to "encourage Iran to keep its commitments" to the so-called Iranian nuclear deal.

‘No Talks With US’: Iran Ready to Negotiate With All Gulf States – Deputy FM
According to the Japanese Kyodo News Agency, the visit will take place on 12-14 June. The last time the Japanese Prime Minister visited Iran was Prime Minister Takeo Fukuda's 1978 trip which happened not long before the Shah of Iran was toppled by the Islamic Revolution.

Previously, Oman, a Persian Gulf state that has also managed to maintain good relations with both the US and Iran, also offered its services as a mediator between the two countries. However, Iranian Foreign Minister Zarif insists Tehran will not engage in any direct or indirect talks with Washington.

On May 15, Iran gave the EU a 60-day ultimatum to provide effective means to shield Tehran from re-imposed US sanctions, saying it will increase its nuclear industry output and abandon some of it self-imposed obligations in relation to the JCPOA deal. Under the deal, Tehran is obliged, to liquidate its uranium stockpile in exchange for the removal of US, UN and EU nuclear-related sanctions. Iran stated specifically that its ultimatum will not violate the terms of the deal.

Washington abandoned the deal unilaterally last year. Recently, the Pentagon began amassing military forces in the vicinity of Iran under the pretext of countering an unspecified military threat from Iran.