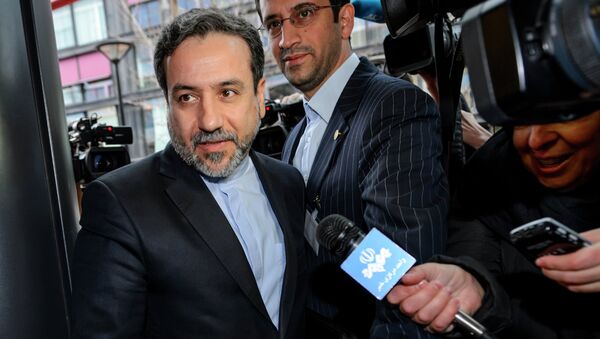 Araqchi is currently on an official visit to Kuwait, during which he conveyed a message from Iranian Foreign Minister Mohammad Javad Zarif to Kuwaiti top diplomat Sheikh Sabah Al Khalid Al Sabah.

"The dialogue with regional states is a basis for the Iranian foreign policy and on this basis Iran is ready to create regional mechanisms for start of the dialogue and constructive cooperation with these countries," Araqchi said, as quoted by the Fars news agency.

Iran Won't Negotiate With 'Great Satan' − IRGC Commander on US Talks
He pointed out that the US policy posed a threat to the regional security.

On Sunday, Araqchi started a trip to the Persian Gulf countries, including Oman, Kuwait and Qatar, in an attempt to reduce tensions in the region.

The US-Iranian tensions flared up last year when the United States unilaterally withdrew from the 2015 nuclear agreement with Iran and started reinstating sanctions on the Islamic republic. On May 8, 2019, Iran announced its decision to partially discontinue its obligations under the nuclear agreement.

READ MORE: ‘No Talks With US’: Iran Ready to Negotiate With All Gulf States – Deputy FM

Iranian Supreme Leader Ayatollah Ali Khamenei has said that Iran does not intend to wage war with the United States, but will continue to resist Washington. Acting US Defence Secretary Patrick Shanahan has made similar remarks, saying the United States was not seeking war against Iran.