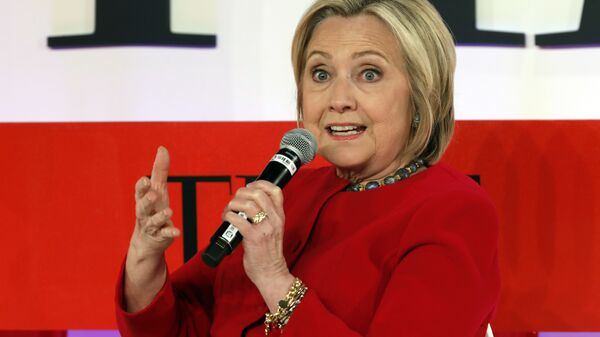 © AP Photo / Richard Drew
Subscribe
International
India
Africa
Hillary’s reference to a popular word game did not go unnoticed by some of her detractors who quickly fired back at her in style.

US Senator and former presidential hopeful Hillary Clinton has apparently managed to raise quite a few eyebrows on social media with what seems to be a thinly veiled verbal attack against US President Donald Trump and his cohorts, involving misspelling and Scrabble.

In her 26 May tweet, Hillary wrote that Scrabble recently updated its list of approved words though the words "covfefe" and "ivesssapology" – two Twitter typos made by Trump and his attorney Rudy Giuliani respectively – "were not among them".

"But those changes aren't yet reflected in the Scrabble app. Where are we on this, @Hasbro?" she inquired.

Earlier this month, Scrabble updated its list of approved words for game play for the first time in four years ("ivesssapology" and "covfefe" were not among them).

But those changes aren't yet reflected in the Scrabble app. 👎

​Some netizens seemed amused by Hillary’s sense of humour or the way she hit out at her opponents.

lol I see you got jokes today, Madam President. 😩🤣😩 pic.twitter.com/hudLxohygk

Waking up to Hillary Clinton throwing some shade just made my day. Drag him, girl! https://t.co/6TNCRtg1HM

​Her detractors, however, used this opportunity to remind the woman who sought to become the first female president in the history of the United States of her failures.

Bernie would have won

​And a number of people simply went on to diss Hillary herself.