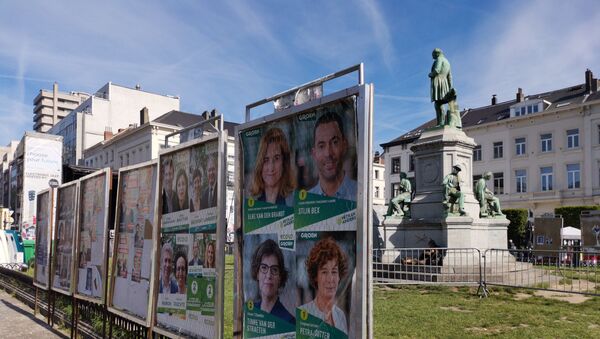 Denis Bolotsky
All materialsWrite to the author
The political battle for EU parliament seats is over with the centre-right European People’s Party (EPP) group celebrating victory. Another key trend is the rise of the right-wing ENF (Europe of Nations and Freedom), which doubled in size and won domestically across the EU.

It was a long and difficult election marathon for both politicians and the 403 million eligible EU voters across Europe, who had to choose among thousands of candidates and their political platforms. Traditionalist parties scored big across Europe, while right-wing and populist movements increased their influence significantly in several countries.

These numbers may change slightly, but at this moment it is pretty clear that the Christian Democrats (EPP) won the majority of votes, taking 180 seats for the next 5 years in the EU Parliament (data from https://t.co/MuyvAdbPU5) pic.twitter.com/cSv27PHlYM

Italy, where voters cast their ballots on the last day of the EU Parliamentary elections, had a ban in place since early May on all election-related opinion polls, and only when the first exit poll numbers finally started flowing in around midnight on 27 May, it became apparent that Matteo Salvini’s right-wing Lega party is far ahead of the competition.

Matteo Bianchi is Lega’s MP in Italy’s Chamber of Deputies. He told Sputnik, that voters in his country picked the party for its tough stance on illegal migration, and for its support of traditional values.

"Lega wants to change policy – especially on migration, and to keep the values of Europe, especially Christian values, and to put the family policies first".

Although the Europe of Nations and Freedom (ENF) group, of which Lega is a member, did not win a majority in EU parliament, it's no longer the smallest group- having doubled in size, with at least 74 seats instead of its previous 37.

Another member of the ENF group in the European Parliament – Belgium’s right-wing Flemish Interest, threw a party outside Brussels to celebrate its success in several areas of the country during regional, federal and EU Parliamentary elections, which were all held on 26 May.

Flemish Interest (VB) became the 2nd largest party in Flanders. In some areas it gained from 20 to 38% of votes. VB (a member of ENF) took 2nd place in the EU Parliamentary race with about 11.5% of votes, a close call for competitors N-VA who scored 13.5%. (provisional) pic.twitter.com/a5gM71NVNh

Flemish Interest, which placed high hopes on younger generations of politicians and on the use of social media to communicate with voters, distanced itself from accusations of racism and xenophobia and relied on candidates who represent diverse ethnicities.

The chairman of Flemish Interest Tom van Grieken shared the secret of the party’s success with Sputnik. “Put your own people first. That’s what a mother does for her children, and that’s the same thing that politicians should do with their people”.

In other countries the traditionalist parties were stronger, but still faced increasing pressure from the right-wingers. Dutch Labor Party (PvdA) won in the Netherlands, with anti-immigrant right-wing Party of Freedom (PVV) plunging to an all-time low of 3.5 percent. PVV’s failure is likely to weaken ENF’s position in the European parliament, but another Dutch right-wing party – Forum for Democracy, which didn’t exist during the 2014 EU Parliamentary elections, and now secured 11 percent of votes, is likely to support some of PVV's ideas.

UK citizens took part in the vote because Theresa May’s government failed to carry out the Brexit procedures, which were scheduled for March this year. The vote has ended with Nigel Farage’s Brexit party taking the lead.

After Brexit the EU parliament will actually shrink in size, with 27 out of 73 British seats in the European parliament being distributed among underrepresented EU nations. Another 46 seats will remain reserved for possible future EU members.

The 2019 EU Parliamentary elections were held in 28 member states during a four-day marathon — from 23 May to 26 May. A total of 751 members of the Parliament were elected.