'There Was No Blood': US Man Dies After Leg Torn Off in Apparent Shark Attack 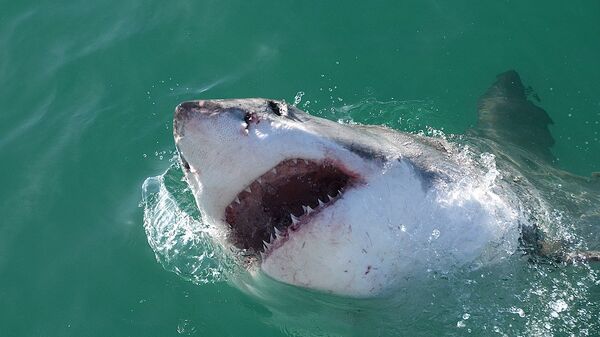 CC BY-SA 4.0 / Olga Ernst / Great white shark Dyer Island
Subscribe
International
India
Africa
The probability of a fatal encounter with a shark is millions of times smaller than dying in a car accident, but fate is often said to work in mysterious ways. What appears to be a shark attack on Saturday became only the sixth fatal incident near the islands in more than two decades.

A California man, 65, has passed away after an apparent shark attack, Hawaii officials said on Saturday.

Local media outlets report that the man was swimming not far from the Kaanapali Shores resort in the Maui County.

The swimmer was pulled from the water with life-threatening injuries consistent with a shark attack but could not be revived, witnesses said.

"As we got closer, I saw some blood on his stomach and then I got looking a little bit more and his wrist, it looked like the skin on his wrist was just torn off," recounted one of them.

"And then I got looking closer and his entire left leg from his knee down was just missing. There was no blood or anything."

Marine biologist Michael Domeier said the chances of getting attacked and killed by a shark are less than one in 12 million.

"Maui has a bit of traffic in the morning. That's actually more dangerous than getting into the ocean," he told local TV channel KHON2.

It is yet unknown which type of shark was to blame, but Domier said it was likely a tiger shark — one of the largest sharks on the planet which have been recorded with the most fatal attacks on humans only behind the great white.

The Saturday incident became the sixth reported shark attack in the islands this year compared to three instances in 2018, according to the Department of Land and Natural Resources.

This was only the fifth fatal attack in Hawaii out of more than 120 attacks on record since 1995. All of them occurred in Mauri, with the last fatal incident reported in April 2015.

It comes just a day after a shark attacked a 10-year-old boy off the coast of New Caledonia.